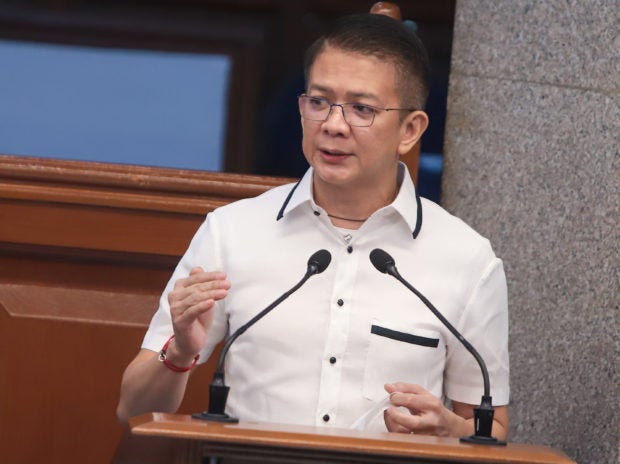 REVIEW OF COVID-19 VACCINES PURCHASE CONTRACTS SOUGHT: Sen. Francis “Chiz” G. Escudero asks the Commission on Audit, Tuesday, November 15, 2022, how the agency audited government contracts related to the country’s purchase of COVID-19 vaccines in years 2020 and 2021, which, according to news reports, were worth P300 billion. (Bibo Nueva España/Senate PRIB)

MANILA, Philippines – The Commission on Audit (COA) on Tuesday said it is willing to use its subpoena powers to compel concerned agencies and offices to divulge information about the amount shelled out for the national government’s vaccine procurement program at the onset of the COVID-19 pandemic.

During Senate plenary deliberations on the commission’s proposed P13.8-billion budget for next year, Senator Francis “Chiz” Escudero asked regarding COA’s audit of the purchase of COVID-19 vaccinations in late 2020 to early 2021.

He was disappointed to find no COA report revealing how much money the government borrowed to pay for vaccines.

Escudero, however, cited news reports which showed that about P300 billion was secured to buy the vaccines.

“I base it on newspaper reports simply because there are no reports. The previous government has been citing non-disclosure agreements (NDAs) so as not to say anything about the procurement of vaccines. That’s why I can only base it on newspaper reports, instead of actual reports coming from the Department of Health (DOH), Department of Finance or for that matter…coming from COA,” he said.

While he credited the COA for auditing the utilization of the vaccine inventory, Escudero asked why they didn’t audit government-manufacturer contracts.

“The mandate of COA is clear. Hindi naman general services office ang COA na titingnan kung ang delivery ay tama at kung nagamit ang binili ng gobyerno (COA is not a general services office that it is limited to just checking if the delivery was correct and if the supply was utilized by the government) That’s part of it, but the more important component was if the money was spent legally, in accordance with law insofar as the requirements for transparency and accountability provided for in the Constitution,” he further pressed.

Escudero inquired how COA will resolve the lacking audit report on the vaccine procurement program.

Senator Juan Edgardo “Sonny” Angara, who sponsored the COA budget, said the commission plans to assert its legal right under the Constitution.

“They have the subpoena powers. They can legally compel the departments involved to submit documents and to testify. They’re willing to use these powers,” he noted.

Responding to this, Escudero said he believes “it’s about time” these powers be used by the COA since it has been over a year and yet the audit on the purchase of vaccines remains a question.

“They cannot keep citing NDAs that COA is not a party to, and as I said, the audit report of COA, insofar as DOH is concerned, is already in and submitted. It cannot be left hanging and simply say that we checked the inventory, they used the inventory, and we still don’t know how much they bought each vaccine and each brand of vaccine,” he added.

Escudero then noted that citing the NDA is “a new breed of excuse” to justify the lack of transparency and accountability.

Angara echoed Escudero’s sentiment but justified that this may have been the case because of the urgency of the situation during that time.

“It has no place in government documents but I guess it had some veneer of legitimacy back then because there were limited supplies and maybe we were scrambling to get the best deal possible. But now that the smoke has cleared, so to speak, there is always time for a reckoning or an accounting and perhaps, we are at that moment already,” he added.

While Escudero recognized the people’s panic at the onset of the global health crisis, he said “it is no excuse not to follow what is written under our laws because a declaration of national emergency does not suspend the operation of certain laws, especially with respect to transparency and accountability.”

Escudero clarified that he has no evidence or specific allegations of corruption and vaccine overpricing.

But he said he was merely demanding transparency and accountability to prevent this from setting an unwelcome precedent to other government officials and agencies.

“I simply do not want it to occur again, however, panicked we may feel, however big the emergency may be, however fast we may need to act. The rules are the rules. The law is the law. And the job of the COA is still the job of COA to do insofar as being the vanguard and guardians of government funds and expenditures,” he explained.

Angara then pointed out that this concern can be raised to the DOH as it previously expressed intention to push for amendments in the vaccine procurement law.

“We really have a chance to elicit the information from DOH themselves, aside from the independent action to be taken by COA. Because then, there is an incentive for them to disclose because we can say we won’t pass any amendatory law unless they level with us as to how much was really spent,” he said.

Under the COVID-19 Vaccination Program Act of 2021, transparency and accountability in the vaccine procurement program are mandated by disclosing the supplier’s name and the amount given for the purchase.

Escudero’s call to audit the purchase of COVID-19 vaccines is nothing new as concerns over the non-disclosure of its prices have previously surfaced in past budget hearings.