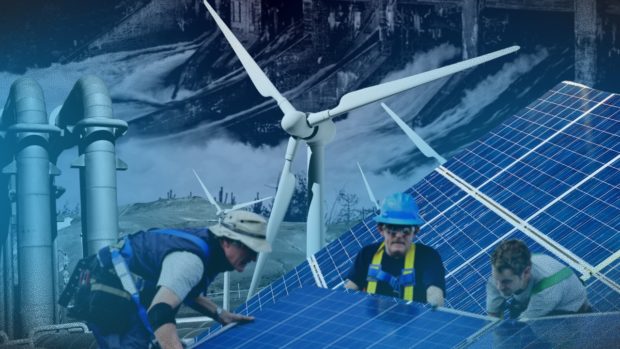 MANILA, Philippines—“Renewable energy is the way to go.”

This was what Yeb Saño, executive director of Greenpeace Southeast Asia, said back in 2016, when renewable energy sources were still having a limited share in power generation. He said “now is the best time to switch on the power of renewables.”

As Greenpeace Philippines stated, with 800 gigawatts of untapped renewable energy, the government, which is now led by President Ferdinand “Bongbong” Marcos Jr., should strengthen the push to transition to renewable energy.

To see the potential benefit of renewable energy, one gigawatt is enough to power at least 750,000 homes so 800 gigawatts means 600 million homes being supplied with non-polluting, renewable energy.

This, as renewable energy sources, like solar and wind, stand to benefit every Filipino, especially because these are expected to provide reliable and cheap electricity to poor households, the group said.

Greenpeace Philippines had said solar energy is “clean, reliable, abundant and an affordable alternative to fossil fuels,” which releases greenhouse gases into the air when burned. 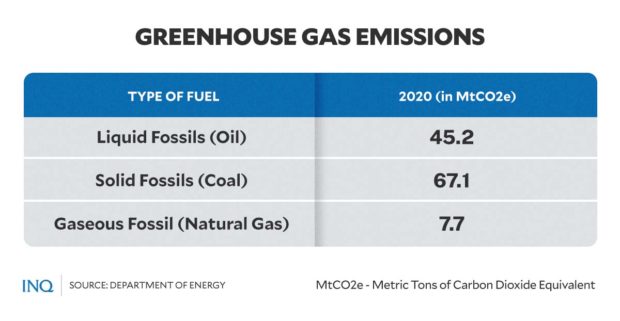 Then last Nov. 10, Ember, the Centre for Research on Energy and Clean Air and the Institute for Energy Economics and Financial Analysis revealed that in the first six months of 2022, solar capacity has increased in the Philippines.

But while generation was still minimal at 1.7 percent of the energy mix, the Philippines was able to save $78 million in fossil fuel spending, according to a report that analyzed Asia’s use of solar energy.

The Philippines was one of the seven key Asian countries whose solar generation capacity helped avoid $34 billion in fossil fuel spending in the first six months of the year—January to June.

Most of these estimated savings were in China, where solar met five percent of the total electricity demand and helped avoid $21 billion in fossil fuel imports during that period, Ember revealed. 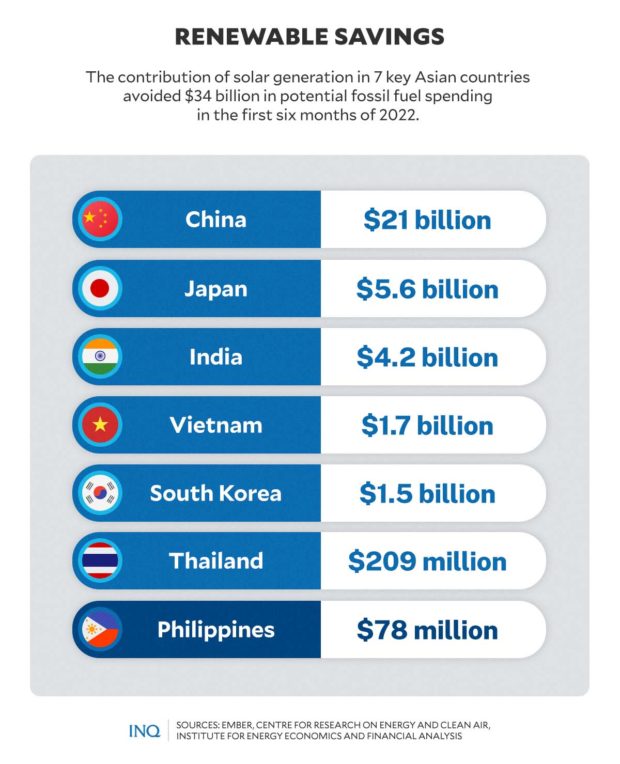 Japan, where solar accounts for nine percent of generation, saw the second biggest contribution with $5.6 billion in avoided fuel costs: “Thanks to solar power generation alone, which reached record levels for the country in May this year.”

Then in India, where the high price of coal is one of the main reasons for the current power crisis, solar generation helped save $4.2 billion in fuel costs in the first half of the year.

It also avoided the need for an additional 19.4 million tons of coal that would have stressed the already strained domestic supply.

Ember said Vietnam, through the use of solar, avoided $1.7 billion in potential fossil fuel costs, while Thailand, where solar accounts for only two percent of generation, saved $209 million.

Then in South Korea, solar had a five percent generation share in the first six months of the year, saving $1.5 billion in fossil fuel spending. South Korea is also one of five Asian countries included in the 10 solar-powered economies all over the world.

As stressed by Ember, solar power in Asia has the potential to grow over the next decade.

This, as based on existing national targets across the five economies—China, India, Indonesia, the Philippines, Japan—“we expect to see solar capacity across the region growing at an average of 22 percent per year until 2030.”

This growth will be most pronounced in China, where solar capacity installations alone are expected to reach 1,200 GW by 2030. However, “we also expect to see significant growth in India, Indonesia and the Philippines.”

Ember said “this will require tailored national policy innovation, investments in energy storage and flexibility, and collective economic and technological cooperation on a grand scale.”

“As the prices of solar and storage plummet, and the potential cost savings have started to materialize, solar dominance in Asia now looks to come much sooner than previously expected.”

Ember stressed that the Philippines “has notable ambitions for solar energy generation.”

It said the Philippines legislated plans to increase solar power capacity to 20 gigawatts by 2030, reaching 46 gigawatts by 2040. If achieved, the 2030 mark would be almost 15 times more than the present level at 1.4 gigawatts. 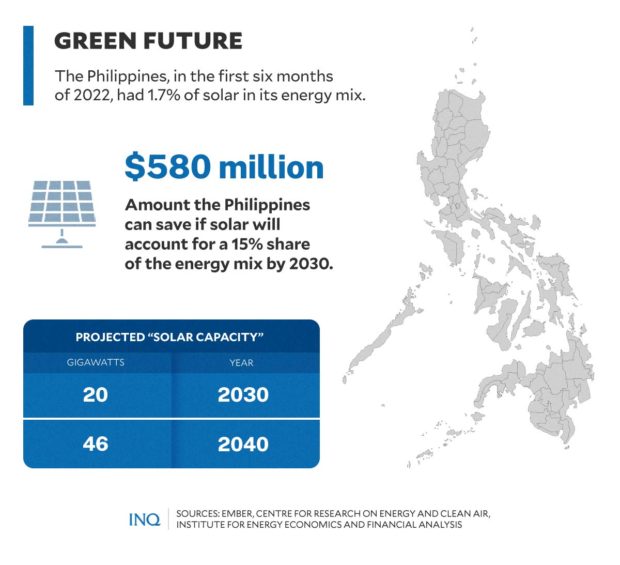 Solar power is expected to continue growing exponentially across five key Asian countries—China, India, Japan, the Philippines and Indonesia—with an average of 22 percent growth each year, positioning the region to become a global hub of solar power.

“The fastest growth rates are expected in the Philippines and Indonesia,” Ember said.

It revealed that solar should account for a 15 percent share of the new Renewable Portfolio Standards by 2030, stressing that if this is achieved, the Philippines could avoid at least $580 million in fuel costs.

“Overall there appears to be a new tone to the Philippines’ efforts to expand solar capacity, which could be a game changer for the country,” it said.

However, Ember said while “ambitious targets are important, they require implementation.”

“There are many barriers preventing the rapid deployment of solar in many Asian countries. Developers in the Philippines face permit bottlenecks, and several other countries exceed the legally binding limits of project development times.”

Based on data from the Department of Energy (DOE), power generation in the Philippines is still primarily sourced from fossil fuels, with coal accounting for over 17,000 kilotons of oil equivalent (kTOE) in 2020.

“With skyrocketing fuel prices expected to remain a factor, stepping up the deployment of solar, removing the existing barriers and creating the enabling environment for new solar could ease the pressure on its energy system and government budgets,” Ember said.

As highlighted by Greenpeace Philippines, renewable energy is winning all over the world, and some cities and provinces in the Philippines have already declared themselves coal-free.

“If we resist coal in our communities and break the myths surrounding renewable energy, we can achieve energy independence and a bright future for us all.” 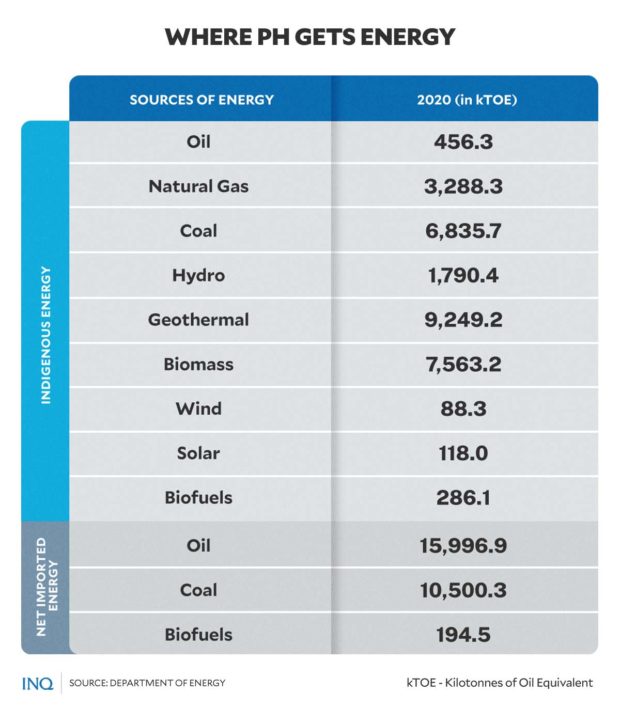 It said coal-fired power plants are one of the leading contributors to climate change, which is now threatening the survival of all life on the planet. It also “harms the environment and public health at every stage of its life cycle.”

That’s why some countries have turned to clean energy sources like wind and solar, which are safer, and even cheaper in the long run, it said.

“Filipinos are on the front lines of the climate emergency, so we need to lead by example. Demand a swifter and just transition to clean renewable energy now.”

Based on data from the DOE, most greenhouse gas emissions came from coal in 2020 at 67.1 metric tons of carbon dioxide equivalent (MtCO2e), followed by oil at 45.2 MtCO2e and natural gas at 7.7 MtCO2e.

Back in 2018, a Pulse Asia survey found that nearly 9 in 10 Filipinos prefer renewable energy over coal and fossil-fuel-based electricity.