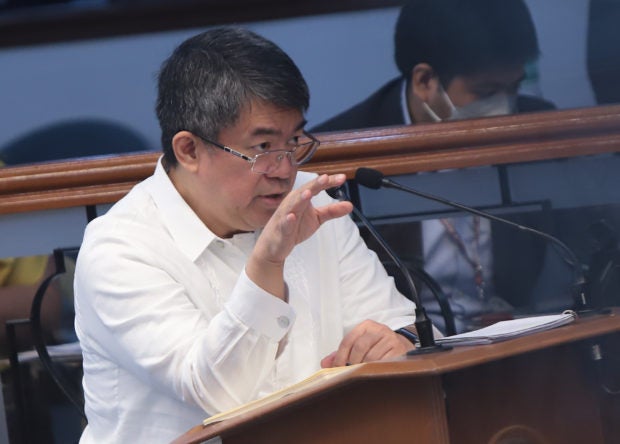 MANILA, Philippines — Senate Minority  Leader  Aquilino “Koko” Pimentel III confronted the head of the Philippine General Hospital (PGH) for not responding to his text message when his wife was about to give birth almost three years ago.

While deliberating on the 2023 budget of the PGH in the Senate plenary Monday night, Pimentel asked its director,  Dr. Gerardo “Gap” Legaspi, why he suddenly “disappeared” when he was following up the case of his wife Kathryna in March 2020.

According to Pimentel, his wife wanted to be transferred to the PGH after a “brouhaha” in a private hospital where she was initially brought in to deliver their baby.

While the senator did not elaborate on the “brouhaha” he was referring to, the couple made headlines at that time when he received his Covid positive test result while accompanying his wife at the Makati Medical Center.

“They told her pwedeng lumipat, she was waiting for the ambulance from the PGH. The doctors were overruled by the director of the hospital so since he was previously in touch with me, I was following up [on] the case of my wife, Pimentel went on.

(Until now, what is the date today? There’s been no reply to my March 2020 text until now)

But the PGH head, through the budget sponsor, Senator Pia Cayetano, claimed he could respond to the text message and the senator even thanked him for their assistance.

Pimentel belied this and insisted he had not received a reply from Legaspi until now.

Cayetano also explained that during the last week of March 2020, PGH had to close and prepare for a week after it was designated as one of the Covid Referral Hospitals at the height of the pandemic.

She noted that the PGH’s Covid Crisis Committee decided not to admit any patient at that time temporarily.

“There’s no intention to single anyone out,” Cayetano stressed.

But for Pimentel, the bad thing was the initial acceptance of the case and, later on, the “non-response that they are no longer accepting the case.”

“It was just the nonarrival of [the] ambulance which convinced us that they are no longer accepting that case to the PGH. What kind of professionalism is that and then the reason being given is the lack of a negative pressure delivery room…” he further said, noting the readiness of another Quirino Memorial Hospital to admit his wife despite the lack of the said facility.

“At any rate hindi natin syempre pipilitin to do a procedure na ayaw nila but the point is, you just disappeared all of a sudden, no word?”Senate President Juan Miguel Zubiri later suggested that PGH explain in writing what happened to the issues raised by the  Minority Leader.

“Ghosting is not an option in this particular situation because we’re all members of the government here…,” Zubiri said.

The Senate leader also stressed that all life—whether you’re a rebel or a government official— is sacred.