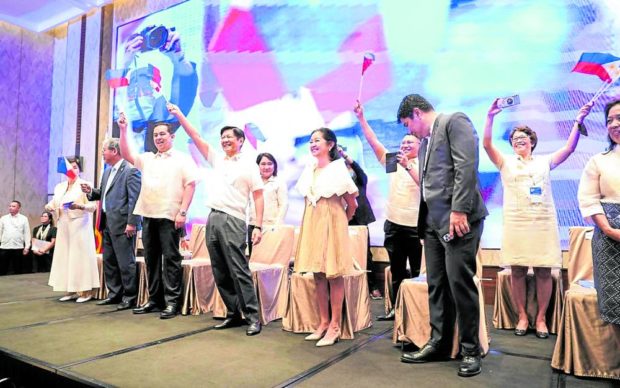 TIME WITH ‘KABABAYAN’ | President Ferdinand Marcos Jr. and his delegation spend time with the Filipino community in Cambodia on Sunday before heading back to the Philippines following his meetings at the Association of Southeast Asian Nations Summits and Related Summits in Phnom Penh. (MALACAÑANG PHOTO)

MANILA, Philippines — President Ferdinand Marcos Jr. on Monday described as “very successful” his participation in the summits in Cambodia last week led by leaders of the Association of Southeast Asian Nations (Asean) and dialogue partners.

In his arrival speech early morning at Villamor Air Base, the president said he was able to “articulate our national interests and our commitment to working with Asean and our dialogue partners to find common ground to address the issues affecting our region and to strengthen cooperation.”

“I think it was quite gratifying to see that there was a very large area of consensus [among] the Asean member states. Like us, they worry about food supply, the price of fertilizer, the price of oil and [other] supply-side problems—very much similar to us,” Marcos said.

“All member states understand that they can’t solve these [problems] alone, there is a need to unite and help one another,” he added.

He had bilateral meetings with leaders of Brunei, South Korea, Vietnam, Canada, China, Japan, and Cambodia, which chaired this year’s Asean meetings.

“[We] discussed how we can deepen cooperation in key areas and exchanged views on important regional and global issues,” Marcos said, adding that he also met with business leaders in the region and discussed with them the participation of Southeast Asia’s micro, small and medium enterprises (MSMEs) in Philippine business as well as investment opportunities here.

Meeting with reporters on Sunday afternoon, Marcos noted the almost casual conduct of his talks with the state leaders.

“In my case, because I’m the new kid in town right [now], so it’s to meet people and say, introduce myself, you know,” he said.

The talks served as an “opportunity for both sides to bring up any subject that you feel is important,” the president said, adding that he took up the welfare of overseas Filipino workers, official development assistance, the economy, and other issues.

“It’s important for me to know their concerns so we can see what can be done. So in terms of the bilateral talks, you don’t really come away from it with an agreement or all that. It’s like having feelers on what are the problems. What do I want? What can we do together? What are the things that we cannot do? All of that,” Marcos said.

Because of the tight schedule, the President said he did not get enough rest or eat properly, as state leaders had to sit through eight to 12 hours of meetings.

“You’re sitting there for what, eight hours, 10 hours, 12 hours, whatever it is. And then you come home, you have to take care of the things that have happened back home. So you don’t really go straight to sleep. You don’t really eat properly. But you know, it has to be done. It’s okay. I mean, you know. Nobody died from honest hard work,” Marcos said.

He added that state leaders would greet each other every day, asking each other, “How are you? Did you get some rest? No. Mr. Prime Minister, how are you doing? Tired. Mr. President, how are you? … Getting more and more tired.”

Yet despite not eating properly, he said he enjoyed the food served at the gatherings.

Marcos said some of the dishes were similar to the food in Indonesia.

“They have rice cakes, too. They have curry with peanuts. It’s not kare-kare. It’s similar to kare-kare but it’s different. I liked it all. I’m afraid I’m an enthusiastic experimental when it comes to food,” he said.

First lady Liza Araneta-Marcos “had a photo taken of the menu, because it would give us some ideas for when [to] make a state dinner when the day comes that we have to host something like the Asean. We can have a reference,” the president said.

Before departing for Manila on Sunday night, he met with members of the Filipino community at the Hyatt Regency in Phnom Penh.

“Even here in Phnom Penh, locals say Filipinos are helpful, industrious, honest. These are traits that we look for in our friends,” he added.

According to the Philippine consulate in Cambodia, there are more than 5,000 Filipinos there, most of them working as English teachers, while others are supervisors in apparel factories and casinos.

Businessman and Go Negosyo founder Joey Concepcion on Monday said he hoped that Philippine MSMEs would directly benefit from the president’s visit to Cambodia.

Speaking at Monday’s Laging Handa public briefing, Concepcion, who attended private sector meetings in Phnom Penh as chair of the Asean Business Advisory Council in the Philippines, said he met with his regional counterparts to push for the Philippine-initiated Asean Mentorship for Entrepreneurs Network (Amen) to benefit MSMEs.

Through Amen, which is being supported by the Japanese government, MSMEs would provide training and support in digitalization, health services, and logistics, he said.

Concepcion and other Filipino businessmen also met with Cambodian traders to explore ways to address the rice shortage in the Philippines. Cambodia, he said, is a big exporter of rice but the exports pass through Vietnam for “processing.”