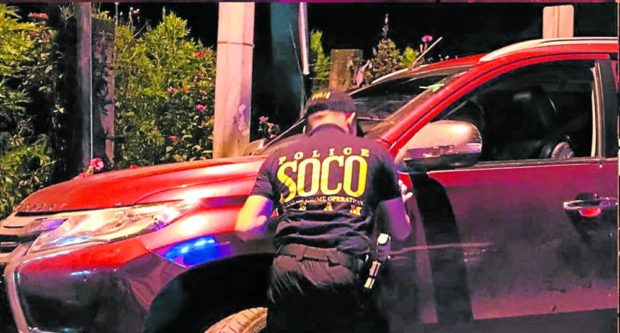 CRIME SCENE A policeman from the Cotabato City police’s Scene of the Crime Operation inspects the car of an Army officer assigned to the Office of the Presidential Adviser on Peace, Reconciliation and Unity who was ambushed in Cotabato City on Saturday. —VOICE FM COTABATO photo

COTABATO CITY—An Army colonel working for peace under the Office of the Presidential Peace Adviser Secretary Carlito Galvez Jr. survived an ambush that killed his driver along a busy commercial district here on Saturday night.

Lt. Col. Manago Macalintangui, 49, was on board a red Mitsubishi Montero driven by Cpl. Ramil Laguioman when fired upon by two gunmen at 7:20 p.m. along Sinsuat Avenue, a busy street just few meters from the main entrance of the Cotabato City Hall.

The military officer was unharmed but Laguioman, 34, was pronounced dead when they reached a hospital here, police said.

Bangsamoro Autonomous Region in Muslim Mindanao (BARMM) police director Brig. Gen. John Guyguyon told reporters on Sunday that the Cotabato City Police Office has yet to determine the identity and motive of the attackers.

Macalintangui has been stationed at the Office of the Presidential Adviser on Peace, Reconciliation and Unity in Cotabato City, where the BARMM parliament and offices are also located, and has been active in the peace and security programs of the Bangsamoro region.

Cotabato City Mayor Bruce Matabalao condemned the series of shootings recently happening in the city, adding he had “given a very clear and strong directive to the city police to get to the bottom of these cases and intensify security measures.”

The attack on Macalintangui came a day after a woman was shot dead along a busy city street and eight days after armed attackers tried to kill the election officer of a town in Maguindanao del Norte province.