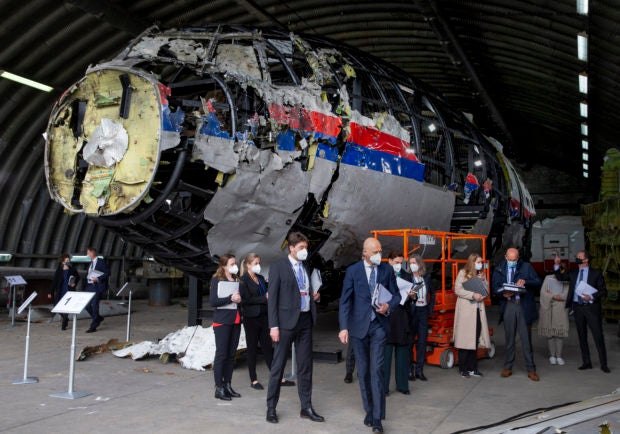 Vleuten, Netherlands — Each night before bedtime in the small Dutch town of Vleuten, Evert van Zijtveld lights two candles at a concrete shrine next to his front door to remember his murdered children.

Eight years and four months ago his daughter Frederique, 19, and son Robert-Jan, 18, died with 296 others when Malaysia Airlines flight MH17 was shot from the sky over war-torn Ukraine.

Now the 67-year-old is hoping for justice and closure in a high-security Dutch courtroom on Thursday, where judges will deliver their verdicts on four suspects who remain at large.

“Those who are responsible for downing MH17 should be sent to prison. If they are guilty, the international community should hunt them down,” Van Zijtveld told AFP in an interview.

For Van Zijtveld and others who lost loved ones when the Boeing 777 travelling from Amsterdam to Kuala Lumpur was hit by what prosecutors say was a Russian-supplied missile, the loss is still raw years later.

Large photographs of Frederique and Robert-Jan adorn the home of Van Zijtveld and his wife Grace, who also lost her own mother Neeltje Voorham, 77, and stepfather Jan van der Steen, 71, in the disaster.

One picture shows a smiling Van Zijtveld cuddling his daughter, which in a tragic irony was taken in the departures lounge at Schiphol airport when Frederique was departing on another trip.

“Angry is not the right word,” sighed Van Zijtveld, a tall and dapper Dutchman who has earned widespread respect through his work in helping other relatives of victims deal with their grief, and setting up a fund for under-privileged children.

“I am just very sad. My children and my parents-in-law were taking a holiday in the eastern part of the world. They were hit by a BUK. They were murdered. They were wonderful people.”

Prosecutors say the four suspects — three Russians and a Ukrainian — played a key role in supplying the missile and have demanded life sentences if the men are convicted.

About an hour’s drive to the east, in the village of Renkum, Sander Essers says he often listens to music to help him deal with his grief.

The 72-year-old lost his brother Peter, sister-in-law Jolette Nuesink and their two children Emma, 20 and Valentijn, 17.

“Some evenings I take some time to listen to my brother’s favourite Brazilian music, to think about him and his family and to cry,” Essers told AFP.

“For me, the verdict will be the partial end for the search for justice for my dear family… I hope the legal proof will be sufficient to come to a verdict.”

Both Van Zijtveld and Essers say the verdict, whatever the judges decide, will be a milestone after more than eight years of heartache, often under the intense glare of the media.

Many bereaved relatives testified during the trial which started in March 2020, offering heartbreaking accounts of the impact from the loss of their loved ones.

“This is a kind of a closure, this phase. It’s too heavy to start it all over again,” Van Zijtveld said.

He had tough words for the four accused, Russians Igor Girkin, Sergei Dubinsky and Oleg Pulatov and Ukrainian Leonid Kharchenko.

“They are real cowards” for not coming to court, he said, his eyes for the first time flashing with anger.

Essers urged those involved in the downing of MH17 to come clean, saying there was no chance of forgiveness until they spoke.

“Open up, if you ever want to be at peace with yourself and to be able to look at yourself with at least some feeling of dignity,” he said when asked what his message was to those involved.

“I cannot accept it,” he said.

“My children and parents-in-law were murdered. I cannot forgive them. I can never do that.”

Russia: Missile that shot down flight MH17 was Ukrainian