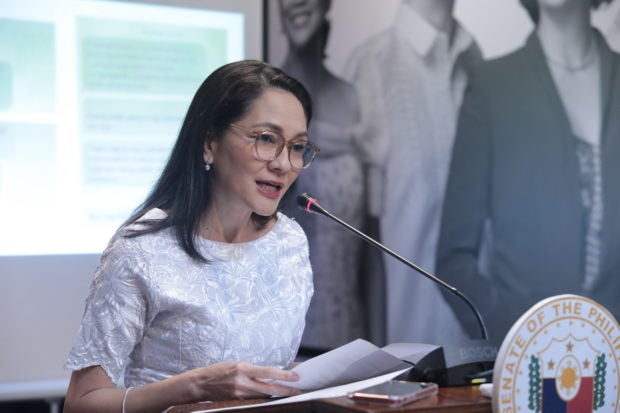 RELENTLESS THREATS: Senate Deputy Minority Leader Risa Hontiveros presents to the members of the Senate media in a press conference Wednesday, October 26, 2022, an audio recording of a phone call conversation between one of the children of slain journalist Percival Mabasa (Percy Lapid) and an anonymous caller issuing threatening messages. Voltaire F. Domingo/Senate PRIB)

President Ferdinand Marcos Jr. should not follow the example of former President Rodrigo Duterte whose borrowing spree had raised government debt to P12.79 trillion by the time he stepped down from office in June, Sen. Risa Hontiveros said on Friday.

The opposition senator warned the President against “overborrowing,” particularly from China, which she said his predecessor did to a large degree “even though it was unnecessary.”

“So President Marcos, just take it easy on the people’s money,” Hontiveros said in a statement.

During budget deliberations at the Senate, the opposition lawmaker cited two major China-funded projects—the P18-billion Kaliwa Dam and the P171-billion South Luzon Long Haul Rail Project from Calamba to Matnog in Sorsogon—that were put in limbo because Chinese investors did not lend the promised money to the Philippines.

“The delay is actually a blessing in disguise,” Hontiveros said.

The deputy Senate minority leader pointed out that as early as 2016, there had been a shortlist of private sector proponents that were prequalified to bid for the opportunity to make capital investments for the two major projects.

“We should do everything so government avoids taking on the heavy loan burden itself,” she said.

Hontiveros also urged the National Economic and Development Authority to review the economic viability of the Mindanao Rail and of the Subic-Clark Rail projects.

‘White elephants’She said she had reason to believe that the economic evaluation of these projects was not thorough at all. “These two projects were also originally offered for China to finance, but the need for them at this time should really be reexamined,” she said, warning that the projects might end up as white elephants.

“Duterte’s pivot to loan financing to the exclusion of PPP (public-private partnership) for his flagship projects was an unsustainable tactic, and reliance on China for loans even more so,” she added.

According to the senator, Socioeconomic Planning Secretary Arsenio Balisacan and Finance Secretary Benjamin Diokno had vowed that nondebt financing options would be pursued “more deliberately.”

Hontiveros said Balisacan and Diokno also assured her that it was possible for the government to partially contribute to the finance of flagship projects and even to take on some of the financial risks.

This would make the project attractive to the creditors of the PPP proponents and would help the Philippines avoid taking on massive debts, she said.

“We need to make sure that the projects get under way soon, however. We just need to fix the crooked trend. Let’s not let these rails in limbo. These railways can be an absolute game changer for Filipinos. It is high time we make these projects happen for our country,” Hontiveros said.During a speech in Pampanga at the opening of the new terminal building of Clark International Airport in Mabalacat City, Mr. Marcos pushed for more PPP projects, assuring investors that the government would improve ease-of-doing business in the country.

He also recently told local government units to partner with the private sector especially in infrastructure and digital projects.

When his predecessor Duterte ended his term, the share of the Philippines’ public debt to the economy stood at 62.1 percent, above the 60-percent threshold for what is globally considered as “prudent.”

Before the pandemic, the Philippines’ debt-to-GDP, which reflects an economy’s ability to repay its obligations, fell to a record-low 39.6 percent in 2019, but massive borrowings to finance cash assistance to vulnerable households and the purchase of COVID-19 shots for the free mass vaccination program bloated the debt pile.

The country’s debt reached a new record high of P13.52 trillion at the end of September, buoyed by the depreciation of the Philippine peso against the dollar and more borrowed funds to support the national budget, according to the Bureau of the Treasury.

Since the start of the Marcos administration, outstanding obligations have risen by P726.17 billion, or 5.7 percent.

Last month, the Marcos administration raised $2 billion from its debut in the foreign commercial bond market. Government bonds are essentially public debt and bond buyers are the creditors.

Gov’t to borrow P200B more weeks before Duterte is gone