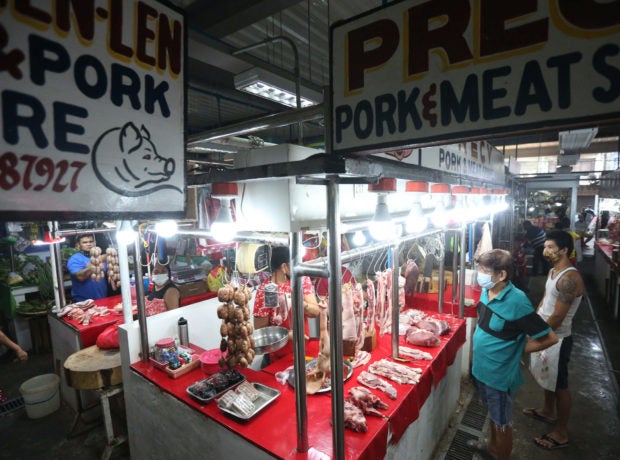 PORK BAN Meat vendors tend to their stalls at Paco market in Manila in this photo taken in April 2021. Pork, its related products and live hogs from Metro Manila, the rest of Luzon and other areas hit by the African swine fever are banned from being shipped into Cebu province. —MARIANNE BERMUDEZ

CEBU CITY—To protect its P10-billion hog industry, the Cebu provincial government has indefinitely banned the entry of live pigs, pork and pork-derived products from Panay Island due to the rise in cases of African swine fever (ASF).

“Right now, of the 81 provinces in the entire country, 62 provinces are infected with ASF. They have not been able to control the ASF spread [on] Panay [Island] and [in] Iloilo [province],” said Gov. Gwendolyn Garcia this week.

Garcia said she would issue an executive order to extend the ban as she called on all airlines and shipping companies to rigorously remind passengers not to bring pork products to Cebu.

Last month, the governor issued Executive Order No. 42 that banned the entry of pork and pork-related products from Iloilo and Panay for a period of 60 days or until Dec. 12.

But ASF cases in Iloilo had spread to five towns—Santa Barbara, Oton, San Miguel, Alimodian and Leganes—prompting Garcia to extend the ban indefinitely.

When she issued the executive order, Garcia said reports indicated that there were only 30 infected pigs in Panay. Now, she said, the number has doubled.

Aside from Panay Island, Cebu province also earlier imposed an “indefinite” ban on all pork and its related products from Luzon, Mindanao and Eastern Visayas, where cases of ASF were reported.

Dr. Mary Rose Vincoy, provincial veterinarian, assured that Cebu would have enough supply of pork and its related products despite the expected rise in demand during the Christmas season.

Cebu, she said, even supplies piglets for repopulation in ASF-infected areas in Luzon, going as far as Ilocos Norte where the hog population declined due to the infection.

The province is a major supplier of pork products to Metro Manila. Cebu’s hog growers have also been tapped to supply pork products and piglets for repopulation in Panay and Iloilo.

For products coming from neighboring Negros Occidental and Negros Oriental, certifications from their provincial veterinary offices would be required before entry to Cebu.

ASF is a fatal and highly contagious disease of domestic and wild pigs with a mortality rate of 100 percent, according to the National Meat Inspection Service (NMIS). It causes pigs to have high fever, lose their appetite, and causes hemorrhages in their skin and internal organs.

There is no known vaccine against ASF but, according to the NMIS, it is not considered a threat to human health. INQ