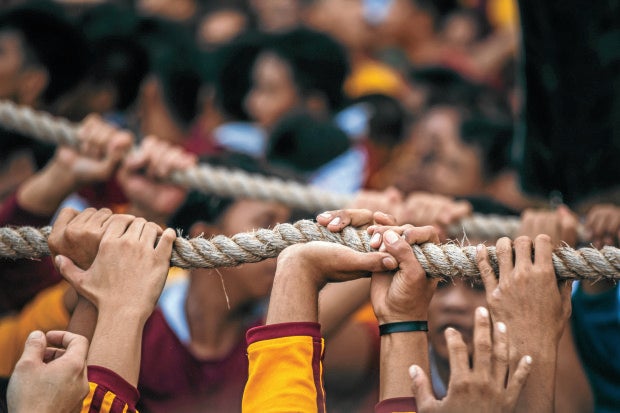 NAZARENO 2017 / January 9, 2017: Devotees struggle to touch the Andas’ Rope for blessing. It is believed to be a great sanctity to touch the rope. Millions of Nazareno devotees join the procession of Translacion in Quirino Grand Stand. INQUIRER PHOTO / JILSON SECKLER TIU

MANILA, Philippines — For the third consecutive time, the Traslacion or the Feast of the Black Nazarene procession will be suspended on January 9, 2023.

However, Fr. Earl Valdez, attached priest of Quiapo Church, said other activities during the celebration will continue.

(Our official position is that all of the usual activities for the feast of the Black Nazarene will continue.)

(However, we will not continue the traditional procession or what we call Traslacion of the image from Quirino Grandstand up to Quiapo Church.)

Valdez said other activities, such as the hourly celebration of the Holy Mass at the Quiapo Church and the mass at the Quirino Grandstand headed by the Archdiocese of Manila, will be allowed to proceed.

Also, instead of the traditional “Pahalik,” devotees can just approach and touch the image of the Black Nazarene.

(The usual Pahalik will now be called “pagbibigay-pugay” or giving tribute, because we need to have some restrictions and sanitation measures so the devotees of the Black Nazarene could approach the image safely.)

“They will be allowed to approach and touch the image,” the priest said when asked to clarify.

Traslacion, which lasts as long as 22 hours, begins at the Quirino Grandstand and ends at Quiapo Church.

The Traslacion, believed by many to have miraculous powers, usually attracts millions of barefoot worshippers who accompany the image in its journey.

The annual procession is a reenactment of the 1787 Traslacion — literally means “solemn transfer” — of the image from its original shrine in Bagumbayan, the present Rizal Park, to the Quiapo Church.

The original statue of Black Nazarene was carved from mesquite wood by an unknown sculptor. It arrived in Manila from Mexico on May 31, 1606.

The image was partially destroyed in 1945 during the battle for Manila in the World War II. A replica, which was made by a renowned saint carver Gener Manlaqui, used the original head of the image.

Traslacion was first cancelled in 2021, when the COVID-19 pandemic struck the country.

Traslacion suspended anew in 2022 as threats of pandemic stay