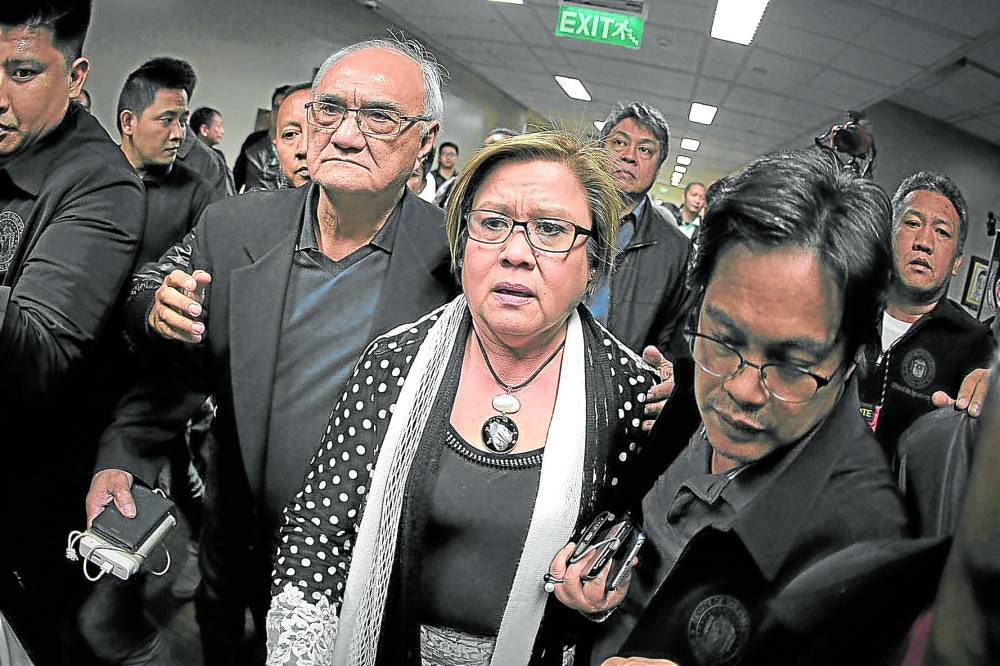 (FILE) Former Senator Leila De Lima after her press conference at the Senate after Judge Juanita Guerrero of the Muntinlupa RTC Branch 204 issued the warrants of arrest against her. PHOTO BY JOSPEH VIDAL.

Suspended Bureau of Corrections (BuCor) chief Gerald Bantag is not old enough to be called “Tanda,” one of the alleged masterminds in the murder of hard-hitting radio commentator Percival “Percy Lapid” Mabasa, according to detained former Sen. Leila de Lima, who urged the authorities to search for the real culprit behind him.

Several New Bilibid Prison (NBP) inmates tagged the grey-haired Bantag, whom they called Tanda (Old Man), as the person who ordered them to raise P550,000 for the Oct. 3 ambush-killing of Mabasa.

The slain radioman-vlogger’s tongue-lashing had whipped both the corrections official and former President Rodrigo Duterte, who appointed Bantag as BuCor director general in September 2019.

De Lima said in a statement from her Camp Crame cell on Wednesday that the 54-year-old corrections official was “not yet that old” to be called Tanda.

“They should pursue the identity of the person known only as ‘Tanda,’” she said. “‘Tanda’ cannot be ‘Bantag’ himself.”

The former senator said the real Tanda could be former President Duterte whom she “always suspected” to have assigned Bantag to head the BuCor to “watch over” the NBP convicts who had testified against her.

Known to his close friends, family and supporters as “Digong,” “Rody” and Du30, the 77-year-old Duterte was later called “PRRD” and “Code One” after he took office as president in 2016.

He was “Charlie Mike” or “CM,” (for city mayor) to his aides when he was chief executive of his hometown Davao City.

Critics gave him the monicker “The Punisher” for his brutal anticrime policy, but he has not been known publicly as “Tanda.”

De Lima said the Department of Justice (DOJ), the National Bureau of Investigation and the Philippine National Police should not contain their investigation just around Bantag.

Besides, she said, there was “still the question of whether Bantag was determined enough to issue the command himself without being ordered by someone more powerful and more brazen than him.”

Southern Police District director Brig. Gen. Kirby John Kraft said Duterte was not among the 160 persons of interest that the PNP had checked on in relation to Mabasa’s killing.

These persons of interest were mostly former and current government officials, including Bantag, whom Mabasa criticized in his program “Lapid Fire.”

Bantag and his deputy security chief Ricardo Zulueta were charged on Monday as the masterminds in the murder of Mabasa and NBP inmate Cristito “Jun Villamor” Palaña, an alleged middleman in the assassination plot.

But the police is “still open” to including “other personalities” as the case progresses, according to PNP spokesperson Police Col. Jean Fajardo.

“If, during the conduct of the preliminary investigation and in the actual trial when this case is filed in court, additional evidence point to other persons behind these two cases, we can always file a supplemental complaint,” Fajardo said in an interview on GMA 7’s “Unang Balita” on Wednesday.

De Lima said it was “improper and premature” for the DOJ to dismiss the possibility that Duterte could be among those who plotted the broadcaster’s murder.

“Are they really that afraid of that butcher? They’ve been shielding him from the ICC probe. And now this?!” she said, referring to the International Criminal Court’s investigation of crimes against humanity in Duterte’s drug war killings.

In a series of tweets following her statement, De Lima urged the government to give protection to the suspended official as his life may be in danger “from a higher and more powerful coconspirator.”

“Secure him. Let him spill the beans,” she said.

Justice Secretary Jesus Crispin Remulla said the evidence so far pointed only to Bantag and Zulueta as the masterminds.

He told reporters on Wednesday that new information indicated that Bantag was “very livid” with anger after Mabasa took pictures of the BuCor official’s house and vehicles in Laguna province on Sept. 9, about a week before the plot to kill the broadcaster was hatched.

“That day itself when General Bantag learned that Percy Lapid was in Laguna, he got angry. He disappeared and did not anymore go back to Bilibid,” he said.

Remulla said Bantag did not return to NBP to attend the graduation of inmates who were enrolled in a joint education program between the University of Perpetual Help and the national penitentiary.

He said that incident was a “significant lead” in the case. “His [decision of] not returning there is a sign also that he was very mad, he was very, very livid about it,” added Remulla.

On Sept. 15, Mabasa reported about a “Cinderella man,” an unidentified justice department official who amassed wealth in office.

“Then on Sept. 17, the plot [to kill Mabasa] started. Everything came into fruition. You would see that really there’s a string that ties everything together,” Remulla said.

The DOJ chief reiterated his call on Bantag and Zulueta to cooperate in the agency’s preliminary investigation.

“I hope they just answer by filing a counteraffidavit and refrain from answering through media. That’s the process. They should respect the law,” he said. “Face it like a man. If you are not a man, if you cannot face it, then what are you?”

Bantag had denied any involvement in Mabasa’s murder. He said in a recent Facebook interview with a former ABS-CBN reporter that he would rather die than be jailed.

“I will be chopped to pieces [once I’m imprisoned]. Will I allow myself to be behind bars? Just kill me. If I am their target, the government and I can just kill each other,” he said. INQ