Giving P669.2 million to agencies with no security functions is questionable not only because of the amount involved, according to the opposition senator. Congress, he says, must nip this practice in the bud before it sets a dangerous precedent.
By: Melvin Gascon - Correspondent / @melvingasconINQ
Philippine Daily Inquirer / 05:46 AM November 10, 2022 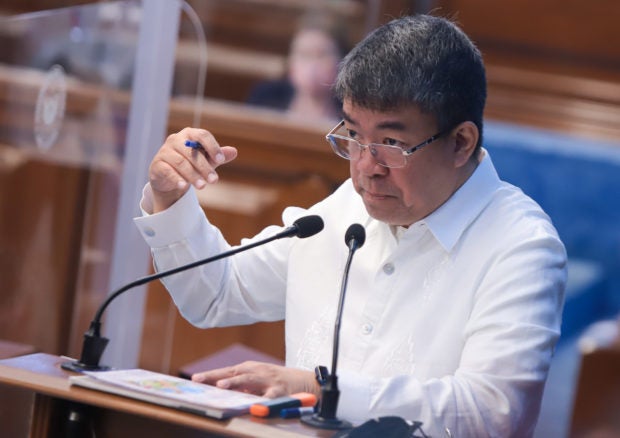 Congress must nip in the bud the revived practice of providing confidential and intelligence funds (CIF) to a number of agencies that are questionable not only for their impropriety but also for the unusual jump in their amounts in the proposed 2023 national budget, Senate Minority Leader Aquilino “Koko” Pimentel III said on Wednesday.

Pimentel expressed concern over the P9.3 billion worth of CIFs earmarked in the proposed budget for next year spread out across various offices, including P669.2 million for three agencies that had nothing to do with national security.

“We urge Congress not to start the practice of providing certain agencies with [CIFs] when for many years, they have existed without these,” he said.

“We face a great risk that if this practice is not stopped, it will only be sustained for many more years and the amount given [for next year] will even be used as a floor amount [for the succeeding year],” he added.

Pimentel made the statement in his interpellation as the Senate began plenary deliberations on House Bill No. 4488, or the proposed P5.26-trillion general appropriations bill.

He questioned the “enormous amounts” being allotted for the CIFs in next year’s budget, even when the Marcos administration has been harping on a government policy to “exercise prudent macroeconomic and fiscal management in prioritizing expenditures.”

A total of P19.2 million is also being proposed to be allotted for the Office of the Solicitor General (OSG).

The three offices comprise the “new” agencies seeking CIFs in next year’s budget purportedly because they did not receive such allocation this year.

“We should no longer start this practice because once it starts, it will already be very difficult to stop and it will be a recurring problem,” he argued.

Of the total P9.3-billion CIF allocation, P4.5 billion is set to go to the Office of the President (OP).

In a previous interview, Pimentel had said that these funds were “prone to abuse and discretion.”

“Generally speaking, we discourage the allocation for CIFs, primarily because these are lump-sum funds and, secondly, the auditing is very minimal,” he said.

Pimentel proposed that the Senate reduce the CIFs in order to cut the bulging budget deficit or to fund items that were more needed by the people.

He said that while he agreed that some of the government’s security-related agencies such as the Armed Forces of the Philippines and the Philippine National Police deserved to get CIFs, such justification could not apply to the OVP, DepEd and OSG.

In response, Sen. Sonny Angara, Senate finance chair, said that CIFs were needed as these supposedly contributed to national security, which, he said, was “the bedrock for prosperity.”

He, however, welcomed Pimentel’s suggestion to slash the CIFs, saying it was within the powers of Congress to decide.

According to Angara, the law also provided limitations on the use of the CIFs, for instance, these could not be used to pay salaries, wages or consultancy fees.

“The use of the CIF must also be supported by documentary evidence of payment, with a certification by an accountable officer signed under oath,” he added.

Angara, however, turned down suggestions to require agencies to furnish Congress with periodic reports on their use of the CIF, to be submitted to the Senate President or the Speaker of the House of Representatives.

“That may not work because the Senate President (Juan Miguel Zubiri) is a very sociable person, so anything contained in those reports on the CIF may be known by other senators the next hour after their submission,” he said.

In the Lower House, Albay Rep. Edcel Lagman earlier called for a purge of “unnecessary, excessive” CIFs in the proposed budget, arguing that “no stretch of the imagination or flexibility of logic” could justify the P9.29 billion of such funds tucked in several government agencies.

He pointed out that the use of CIFs was “shrouded in mystery and the supposed audit by the Commission on Audit could not be disclosed to the Congress and the public.”

“These funds breed corruption, and the more enormous the funds are, the greater the magnitude is for the possibility of graft,” Lagman pointed out.

He said that the P4.5-billion allotment for the OP could be used to fund the salary increase of 460,000 teachers or 368,000 nonteaching personnel.

The same amount could be used to repair and rehabilitate 6,800 classrooms or provide 31,200 school seats or hire 9,300 nurses for the schools or provide 700,000 classrooms with improved ventilation based on the latest COVID-19 protocols. —WITH A REPORT FROM INQUIRER RESEARCH INQ