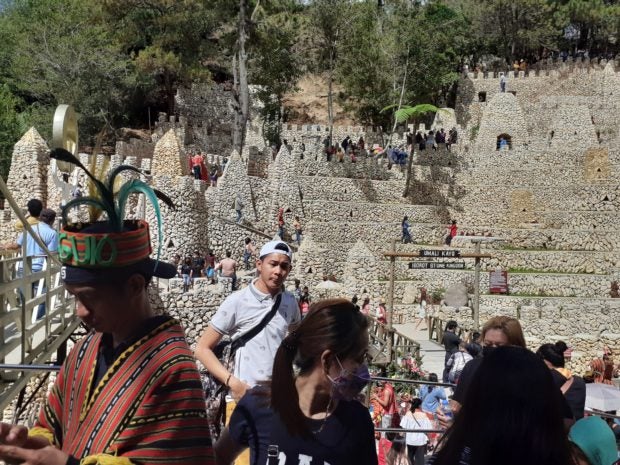 ATTRACTION CLOSED Tourists flock to Igorot Stone Kingdom, one of the newest attractions in Baguio City, in this photo taken on March 13. But the city government on Wednesday stopped the
operation of the theme park, which became popular due to social media, over safety issues and permit violations. —ALLAN MACATUNO

BAGUIO CITY—A tourist spot that has become a social media attraction a little over a year since it opened during the coronavirus pandemic was closed on Wednesday by Mayor Benjamin Magalong over safety and permit violations.

Igorot Stone Kingdom is a 6,000-square-meter amusement park billed as a showcase of Cordillera ingenuity, such as “ag-kabite,” an indigenous rock and stonewalling technique mastered in Mountain Province and an accepted engineering practice.

Echoing elements of fantasy television shows like “Game of Thrones,” guests enter a gateway guarded by giant statues of Igorot warriors and medieval stone bridges and stairways that lead to “stone domes” dedicated to Cordillera deity “Kabunyan,” the first man (Gatan) and woman (Bangan) in Ifugao lore, and an Igorot mine.

Stone Kingdom, owned and operated by businessman Pio Velasco, has been flooded with visitors and has caused traffic jams at Barangay Pinsao since opening in May 2021.

It has been included in the itinerary of local tours after word-of-mouth referrals and recommendations by travel vloggers on social media made this park a Baguio destination, said Jovita Ganongan, Cordillera director of the Department of Tourism.

The outdoor destination charges an entrance fee of P100 and is a block away from the much older Tam-awan Village, an art and culture hub which recently hosted an international arts festival. But at the November 8 city managers’ meeting, Magalong ordered Stone Kingdom’s closure for failing to heed safety notices issued by the local government and for operating without permits.

Architect Johnny Degay, city building officer, did not respond to inquiries about these violations.

However, a copy of the closure notice signed on Wednesday by Magalong indicated that some of the structures had no visible engineering support “to prevent the stones from detaching” from walls or dome pillars, except for cement grouts (the concrete mixture used to fill gaps between stones).

The notice also saw safety violations at the Igorot Mine attraction for having no support systems that should prevent “cave-ins or the collapse of the ceiling.”

The document cited an observation made by the Mines and Geosciences Bureau that the property lies in an area that is prone to erosion. The climate risk and vulnerability assessment being conducted for Baguio by the Asian Development Bank also concluded that Stone Kingdom was threatened by “high landslide exposure,” the notice says.

It was not clear how the attraction was allowed to operate without permits. The notice says the city’s business licensing office had first issued a notice of violation in May, followed by a cease-and-desist order from Degay for building violations.

The document says Magalong initiated dialogues with Velasco to compel him to heed the safety issues raised by the city, only to resume issuing violation notices in July after the businessman allegedly built new attractions without incorporating the suggested safety features.

“If [the Stone Kingdom owner] follows the rules, that may be up and open again. But its closure would not disrupt tourism traffic to Baguio and the Cordillera. There are many more places to see here,” Ganongan said.

The city has stopped requiring tourists to sign up in a travel registry which helped track the number of daily Baguio visitors, but 30,000 tourists continued to visit on weekends during the rainy season, according to estimates from the city tourism office.

Last week, Ganongan relaunched the Cordillera’s new tourism brand, “Find Yourself in the Cordillera,” which highlights mountain treks for self-reflection and for adventure following two years of lockdowns. It describes Baguio as the gateway to the rest of the highland region.

She said the new slogan “captures everything we have—nature, adventure, culture and wellness,” and relies on the fact that every generation has good memories about the summer capital.

Baguio has again become easily accessible when car travel was reduced from seven to four hours due to a new network of expressways. On Dec. 16, Philippine Airlines will begin offering Baguio to Cebu flights at Loakan Airport. INQ