Wounded passenger turns out to be one of 3 persons behind blast, police say
By: Edwin O. Fernandez - @inquirerdotnet
Philippine Daily Inquirer / 05:17 AM November 10, 2022 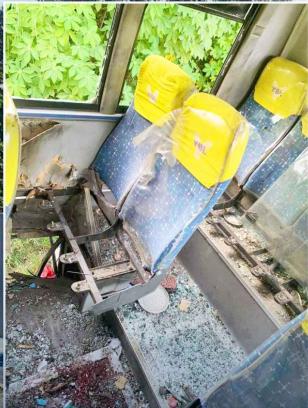 EXPLOSION AFTERMATH | A section of the Yellow Bus Line bus shows ripped seats and shards from shattered windows after an explosion in Tacurong City on Nov. 6. —PHOTO COURTESY OF SOCCSKSARGEN REGIONAL POLICE

TACURONG CITY—Police on Wednesday announced the arrest of one of the suspects in the bombing of a passenger bus here on Sunday that killed a man and wounded 11 others.

The suspect, whose leg was recently amputated, was among those severely wounded when an improvised explosive device exploded at the rear portion of a Yellow Bus Line (YBL) bus while it was passing through Barangay New Isabela at 11:45 a.m. on Nov. 6.Brig. Gen. Jimili Macaraeg, regional police director of Soccsksargen (South Cotabato, Cotabato, Sultan Kudarat, Sarangani and General Santos), identified the suspect as Esmael Daomilang, 55.

Macaraeg said the “statement of witnesses and pieces of gathered evidence” pointed to the participation of Daomilang as one of the suspects in the bombing of the YBL bus.

Daomilang is a resident of Buluan town, the capital of Maguindanao del Sur province.

Macaraeg said a case for violation of Republic Act No. 11479, or the Anti-Terrorism Act of 2020, was filed against Daomilang at the Office of the City Prosecutor here on Wednesday.

The suspect is still confined in a hospital under tight police watch, he added.

“We are in high spirits about this accomplishment,” Macaraeg said.

“However, our efforts will not slow down. We will continue to hunt down the cohorts of the accused and ultimately, dismantle the Dawlah Islamiyah group, which is believed to be responsible for this atrocity and the other bombings (of YBL buses) in the region,” he added.

Macaraeg directed all police units in the region to keep tight security measures to ensure the safety of the public.

Sunday’s blast was the fourth to have hit a YBL bus this year. Authorities earlier suspected the attack might have been related to an extortion demand because of the four bus companies plying the General Santos-Koronadal-Tacurong route, only YBL buses were targeted.

The bus came from Kidapawan City and was bound for General Santos City. It had a pit stop in Tacurong, Sultan Kudarat province.

Earlier, police claimed that four women were responsible for bringing the explosive into the YBL bus, with the group supposedly boarding in Cotabato province. Three of them alighted at a bus stop before reaching the city’s welcome rotunda while the fourth disembarked near St. Louis Hospital shortly before the explosion. 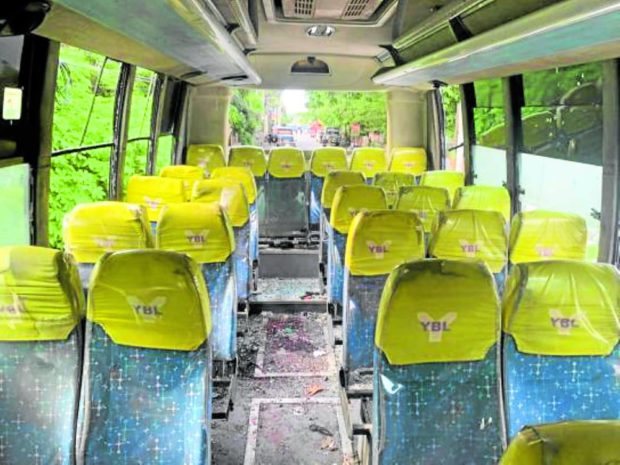 Col. Dennis Almorato, commander of the civil-military battalion of the Army’s 6th Infantry Division, tagged the Dawlah Islamiyah terror group operating in Maguindanao for carrying out the bombing.

“It was a case of premature explosion because the main charge of the improvised bomb was so sensitive and went off before the suspect could disembark,” Raymundo told dxOM-AM radio in Koronadal City, South Cotabato.

He said Daomilang boarded the bus in Buluan town, not in Cotabato as first reported.

Citing the account of witnesses, Raymundo said Daomilang had two other companions when they boarded the bus and were seated at the rear section. One alighted in Barangay San Pablo, Tacurong, and the other fled after the blast. INQ