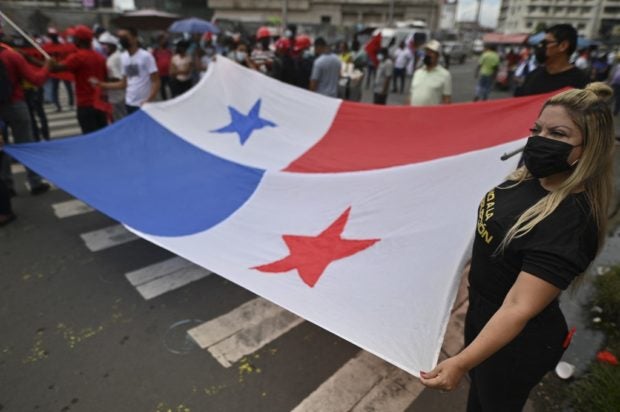 FILE PHOTO: People protest against alleged corruption cases in President Laurentino Cortizo’s government, on the second anniversary of his administration in front of the National Assembly in Panama City, on July 1, 2021. (Photo by Luis ACOSTA / AFP)

Judge Baloisa Marquines opened a criminal case against the two former leaders for crimes “against the economic order in the form of money laundering,” read the trial summons.

The two men, who collectively led Panama between 2009 and 2019, will be tried alongside 34 others, including five former ministers.

Two of Martinelli’s sons — who are both imprisoned in the United States after pleading guilty to receiving $28 million from Odebrecht — will also be tried.

Prosecutors accuse Martinelli and Varela of using front companies and foreign bank accounts to receive funds from Odebrecht between 2008 and 2014.

In 2016, Odebrecht pled guilty in a Brooklyn court to paying more than $788 million in bribes to government officials and political parties, mainly in Latin America, to win infrastructure contracts.

The Brazilian company admitted paying bribes worth $59 million in Panama in exchange for contracts to build public works.

According to the Public Prosecutor’s office, the company overbilled the Panamanian government for some of the projects.