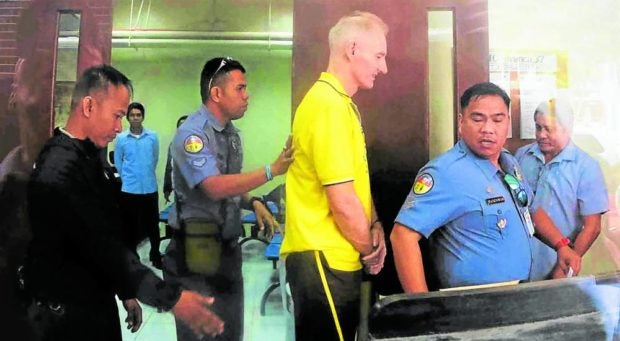 CONVICTED In this 2018 photo, convicted child abuser Peter Gerard Scully (middle, in yellow shirt) is escorted by police officers out of the courtroom following his sentencing. —JIGGER J. JERUSALEM

CAGAYAN DE ORO CITY—A local court last week sentenced an Australian to 129 years in prison for different sexual offenses against children, most of these occurred in the cities of Surigao, Malaybalay and Cagayan de Oro in 2012.

Peter Gerard Scully, 59, along with three locals, was accused of qualified trafficking in persons, syndicated child pornography, child abuse, rape, and photo and video voyeurism, victimizing seven girls, with one as young as 18 months.

The sentencing stemmed from the decision of Scully and his three coaccused to enter into a plea bargaining agreement, said Regional State Prosecutor Merlynn Barola-Uy.

Barola-Uy said the four admitted to having committed 60 cases of attempted trafficking in persons, child abuse and sexual assault.

She said Lao was included in the case due to his role as the driver for Scully and was charged with trafficking.

Like Scully, Margallo will also be serving a longer prison time, as she was sentenced to 126 years in jail.“After five years of prosecuting the cases, finally, the accused have decided to enter into a plea bargaining agreement. They pleaded guilty to the charges so they could be given shorter sentences. And we welcome that development, since, except for three of the victims, all the accusers are now adults,” Barola-Uy said.

She said the victims and their families have witnessed the court proceedings at the Regional Trial Court Branch 37, presided by Judge Ali Lloren, leading to the plea bargaining agreement, done online, on Oct. 25 and Nov. 3.

Barola-Uy said it was decided by the court early on that the charges Scully and his coaccused were facing be divided into two batches, with the second batch consisting of 60 cases, including the death of a child who was buried in the kitchen of a house in Surigao City where Scully used to live.

In 2018, Scully was meted life imprisonment, along with his previous live-in partner, Carme Ann Alvarez, for the first batch of cases mainly on qualified trafficking in persons and five counts of rape by sexual assault.

Scully and Alvarez are serving their respective sentences at the Davao Prison and Penal Farm in Panabo City, Davao del Norte province, for the first batch of cases. INQ