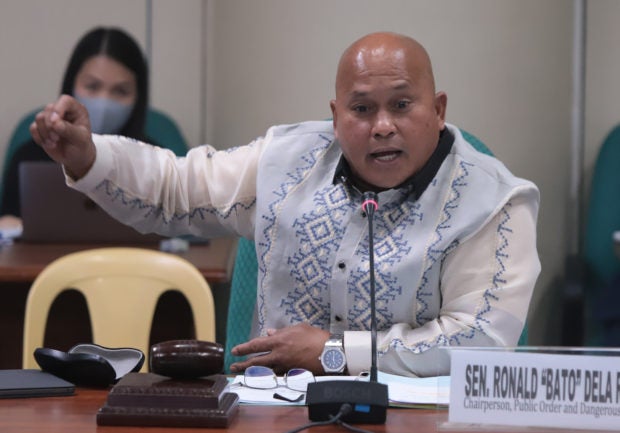 Dela Rosa at the hearing of the Senate Committee on public order and dangerous drugs which he chairs was referring to the instances where a person cannot get a police clearance in one area due to a “hit” in his or her record but can get the same document elsewhere where the same person’s criminal record is clean.

This problem within the PNP, he said, makes the police organization look funny to criminals.

“You better amend the Constitution if you cannot fulfill the national scope of your work,” he added.  “You look like comedians here, you clear a person who has a pending warrant of arrest in Caloocan or another town?  So what we should do for the PNP to be credible is to nationalize their clearance system.”

The committee was deliberating Senate Bill No. 725 authored by Dela Rosa himself, which seeks to establish a national police clearance system.  If this bill is enacted, a system that would ensure that criminal records of individuals including warrants of arrest, photos, details of wanted individuals, fingerprints, and even ballistic examination results would be available in a database.

As of now, the PNP has a National Police Clearance System, and there have been cases where people trying to obtain police clearance from a town where he or she has a clean record was eventually arrested due to effective profiling.

In September 2022, a man who applied for a police clearance in Tagbilaran, Bohol was arrested as he had a pending warrant of arrest for a case docketed in Davao del Sur.  Still, there have been concerns that some criminals are getting away with a police clearance by applying in a far-flung area.

READ: Man applies for police clearance, gets arrested instead in Tagbilaran City

But aside from PNP’s capabilities, Dela Rosa also scolded the police force for proposing it would be the primary agency tasked to handle clearing documents.

Dela Rosa sided with the National Bureau of Investigation (NBI), which contested the bill’s provision which makes the PNP the primary government agency responsible for clearing individuals like jobseekers and other persons who may need clearances.  At present, the NBI also issues a clearance document which most job hunters use when applying for work.

“PNP, if you would propose a measure, see to it that you would not cross another agency’s mandate, you placed there that you would be the sole repository, it seemed that you were taking the role of NBI, so what we would do now is to retain the national clearing house identity of NBI, they would still do that, what you would just do is to upgrade your clearance system,” Dela Rosa said.

“We respect your (NBI’s) mandate that you are the national clearinghouse, the police won’t get that, the provisions you cited will be amended, we cannot run through your mandate, you cops, do not step on the line of NBI, that has been their job for a long time and now you would just grab it from them?” he added.

At the same time, Dela Rosa urged the NBI to welcome changes in the PNP, and allow the police force to develop its own clearance system without superseding the NBI’s functions.

“You cannot stop because of just plain turf war […] We cannot stop the PNP from modernizing, upgrading, because their basis is that under the Philippine Constitution, there shall only be one police force, national in scope, civilian in character.  How can this be a national police force if it only issues local clearances, if they cannot nationalize,” he said.

“What they ask is that, the NBI should be happy that the PNP is upgrading, you must be happy with your brothers in the PNP, don’t hinder their growth because would you be okay with criminals considering your friends in the PNP as comedians because they cannot issue correct clearances?” he asked.

Representatives from both the NBI and the PNP agreed with Dela Rosa’s suggestions.  The bill, however, was not yet approved by the committee pending talks on how the two agencies can operate independently yet harmoniously.