NDRRMC: 123 of reported 158 deaths due to Paeng confirmed | Inquirer News

NDRRMC: 123 of reported 158 deaths due to Paeng confirmed 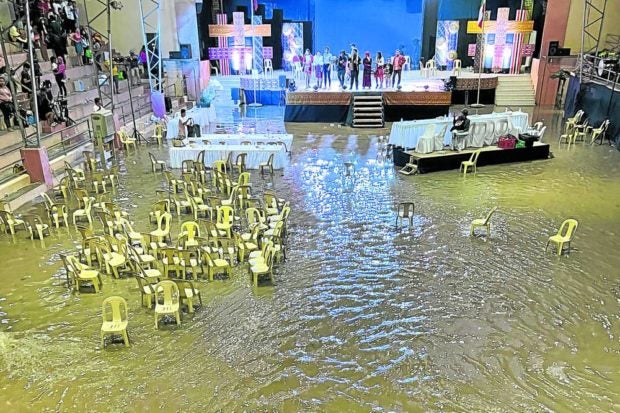 FILE PHOTO: Floodwaters rise unexpectedly at the municipal gym of North Upi, Maguindanao, at the tail end of a cultural program held by the Bangsamoro government around 1 a.m. Friday, October 28, 2022. The people inside were apparently caught by surprise by the heavy rainfall in their part of Mindanao since Tropical Storm Paeng (international name: Nalgae) was bearing toward the other side of the archipelago. —AFP

MANILA, Philippines — The number of confirmed deaths due to Severe Tropical Storm Paeng (international name: Nalgae) increased to 123 as of Tuesday, based on the latest update from the National Disaster Risk Reduction and Management Council (NDRRMC).

Meanwhile, the agency added that 23 persons had been verified missing since the severe weather event struck in late October.

According to the NDRRMC, the 123 confirmed fatalities were among the 158 death reports while the 23 missing people were among the 34 missing person reports it received as of November 8. This means that the agency was still validating the remaining reported 35 deaths and 11 missing persons.

It also said that many of the death reports came from the Bangsamoro Autonomous Region in Muslim Mindanao (63 confirmed deaths), followed by Western Visayas (34 confirmed, two for validation) and then Calabarzon (20 confirmed, 13 for confirmation).

The NDRRMC likewise confirmed in its fresh update the injury of 108 people due to Paeng. So far, it received reports of 142 people injured and was still verifying 34 of these reports, it noted.

From the sum, 44,214 remain in evacuation centers, said the NDRRMC.

In terms of agricultural and infrastructure damage, the NDRMMC said collective losses had surpassed P7 billion as of November 8.

Paeng also destroyed P4,514,856,137.88 worth of infrastructure to date. These infrastructures include 802 schools, roads, and government facilities.

Meanwhile, power and water service interruptions still occurred in 97 and six areas, respectively, as communication lines remained unstable in 37 locations – 36 in Eastern Visayas and one in Mimaropa, the NDRMMC added.

State of calamity declared over Calabarzon, Bicol, Western Visayas, BARMM due to Paeng