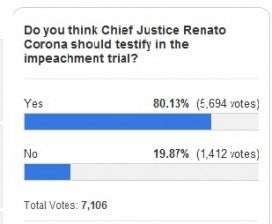 In an informal poll conducted from March 1 to 29, 80.13 percent or  5,694 readers answered “Yes” to the question, “Do you think Chief Justice Renato Corona should testify at the impeachment trial?”

Meanwhile, 19.87 percent or 1,412 readers did not agree that the chief magistrate should take the witness stand.

Corona, who is facing trial at the Senate, sitting as an impeachment court, already appeared on television and radio programs two weeks ago, insisting his innocence. He said he would take the witness stand if asked by his lawyers.

Several politicians have called on the Chief Justice to clear his name.