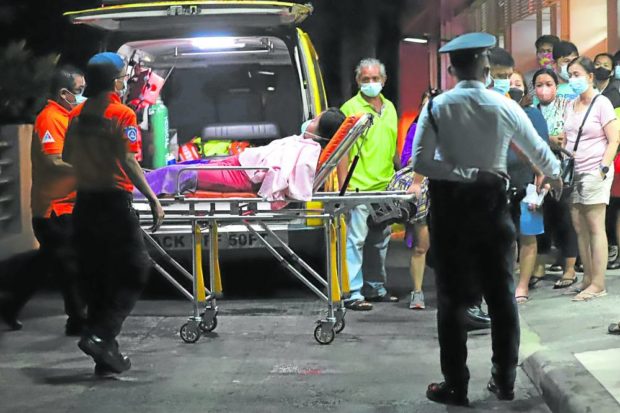 SAVED One of the teachers hurt in a bus accident in Bataan arrives at Quezon City General Hospital on Saturday night. —PNA photo

The Quezon City government and the School Divisions Office (SDO) of the Department of Education (DepEd) pledged to shoulder all medical expenses for the 18 public schoolteachers who were injured at a bus crash in Orani, Bataan, around noontime on Saturday.

Officials of the city government and the SDO also said they would extend financial assistance to the family of the lone fatality in that incident.

They are also arranging the transport of that passenger’s remains.

Lawyer and DepEd spokesperson Michael Poa said the fatality was “a teacher of Payatas B Elementary School, [who] was declared dead on arrival at Orani District Hospital due to a fatal injury.”

The bus, which transported a total of 48 passengers, fell down a ravine while negotiating a sharp curve.

Some of the injured were rushed to Orani District Hospital and Balanga Provincial Hospital, while others were brought to the 1Bataan Command Center, Medical Aid Station Facility.

The victims were among the 141 public elementary and secondary schoolteachers from Quezon City ferried in three buses to attend a forum on gender and development in the province.

The bus driver is being held at the Orani Police Station for questioning.