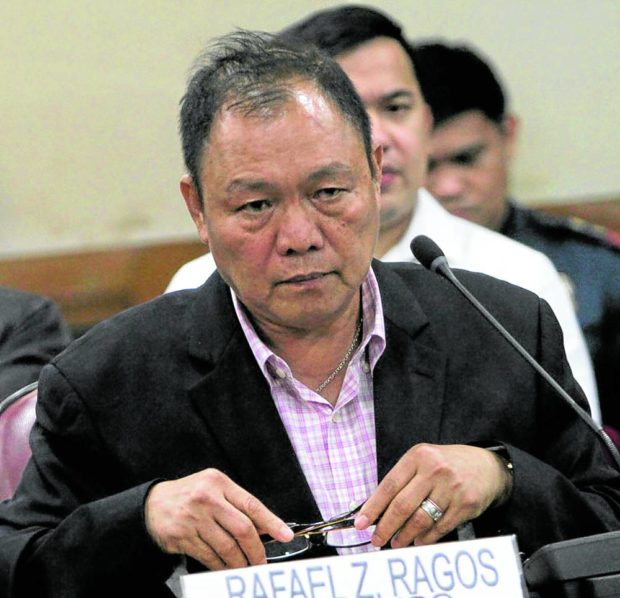 At the risk of being charged with perjury, former Bureau of Corrections (BuCor) chief Rafael Ragos testified on Friday that he implicated former Sen. Leila de Lima to the drug trade in 2016 because he feared for his safety and that of his family at a time when the police were killing thousands of people.

Ragos, one of the key witnesses against De Lima, took the witness stand at the Muntinlupa Regional Trial Court (RTC) to affirm, under cross examination, his recantation that De Lima took bribes from drug lords imprisoned at New Bilibid Prison when she was justice secretary.

Journalists were not allowed in the courtroom of Branch 204 by Judge Abraham Joseph Alcantara.

Ragos’ lawyer Michael de Castro stressed that his client was only forced to execute the depositions because he “was afraid for his life, his career and his family.”

De Castro said the former BuCor chief did not immediately recant his testimonies because he was afraid of fighting the government as “so many people were being killed in 2016 under ‘(Oplan) Tokhang.’”

He was referring to the national police operation that resulted in the acknowledged killing of more than 6,000 drug suspects without charges even being filed in court.

Prosecutors, however, maintained that the court should disallow Ragos’ recantation and argued that his initial affidavits were not coerced.

“At the time the information was put into writing was being done, there was, on the part of the witness, a freedom of decision. He was not coerced. He was fully aware of what he was saying. There was no compulsion from any party to disclose any information,” said Deputy City Prosecutor Darwin Cañete.

The case, Criminal Case No. 17-165, was one of three related but separate cases filed against De Lima. Another, CCN 17-167, is still pending in another RTC branch while CCN 17-166 has already been dismissed for lack of evidence.

In his 2016 affidavit, Ragos testified that he delivered drug money worth P5 million to De Lima’s Parañaque residence, but he recanted that testimony in May this year.

In the recantation, Ragos said he was “forced to deliver court testimonies against [Sen.] De Lima and Ronnie Dayan due to threats of being detained myself for the crime of engaging in the illegal drug trade that I did not commit.”

Ragos was one of De Lima’s coaccused in CCN 17-165, until he was made a state witness by government lawyers under then Justice Secretary Vitaliano Aguirre II during the Duterte administration.

Ragos also alleged in his recantation that Aguirre and some lawyers from the Public Attorney’s Office told him to corroborate the drug allegations against De Lima.

Aguirre denied coercing Ragos and issued a press statement on Nov. 3 claiming that he had video footage of Ragos voluntarily signing a deposition against De Lima. That video has not been presented in court.

But Ragos’ lawyer said that even if prosecutors present such a video in court, it only proves that there is a video but does not disprove Ragos’ claim that he was forced into signing the affidavits.

De Castro cited procedural rules and said that a written and signed waiver of his Miranda rights in the presence of a lawyer is the only way to disprove coercion.

De Lima’s lawyer Boni Tacardon said he was convinced that Ragos was telling the truth because his recantation included admissions against Ragos’ own interest.