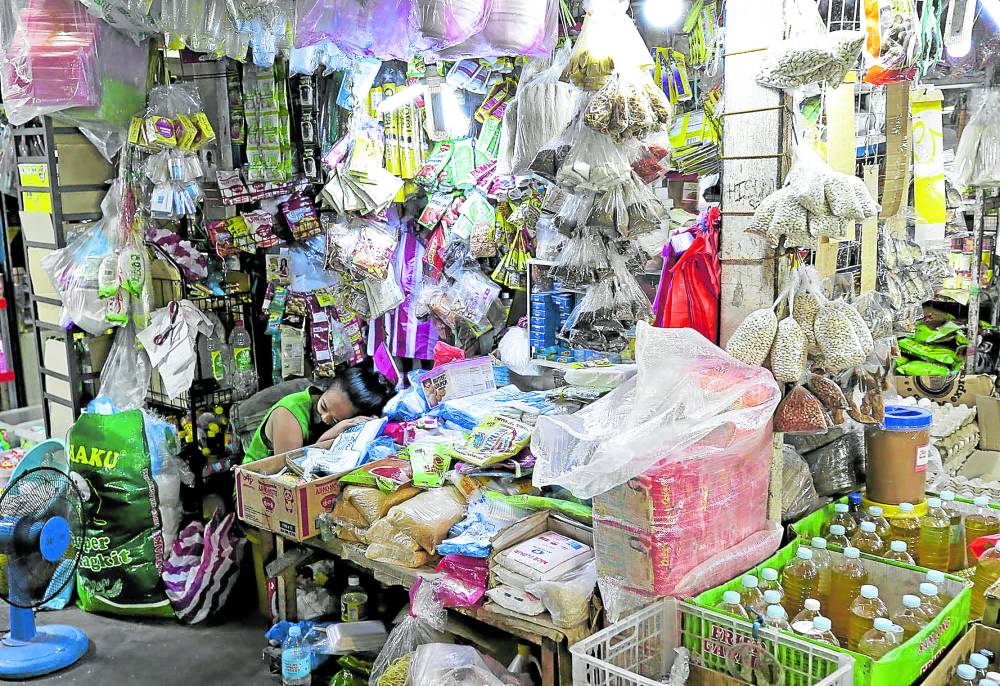 SLOW MARKET DAY A vendor takes a rest as she waits for customers at Quinta Market in Quiapo, Manila, on Friday, the same day that the government reported a 14-year high inflation rate of 7.7 percent in October. Businessmen see lower sales as a result, expecting consumers to be more cautious in spending their money with prices on the rise. —RICHARD A. REYES

The government will continue providing fuel subsidies or discounts to transport workers, farmers and fisherfolk, and cash transfers to the poorest Filipinos to soften the blow from a 14-year high inflation rate, which could still rise before the year ends, officials said on Friday.

The rate of growth in the prices of goods in the Philippines heated up further from 6.9 percent in September to 7.7 percent in October, the highest since the 2008 global financial crisis, according to the Philippine Statistics Authority (PSA).

“It is not certain that inflation in October is already the peak,” said National Statistician Dennis Mapa.

He said that with the recent storms that ravaged farms and fisheries, there was a “substantial probability” that inflation would be higher in November.

The PSA said the 10-month or January-October average inflation was 5.4 percent.

Felipe Medalla, governor of the Bangko Sentral ng Pilipinas (BSP), said in an interview with BloombergTV on Friday that inflation was expected to peak either in November or December.

“Next year it should average close to 4 percent. By the second half of 2023, it will be below 4 percent already,” Medalla said.

This is part of the administration’s “key response” to rising inflation as it builds on its “climate action and food security” programs, Garafil said.

“The President is committed to support our farmers and other stakeholders in agriculture in postdisaster recovery, while improving the value chain and investing in climate-smart technologies remain a priority in the medium and long term,” she said.

Both Finance Secretary Benjamin Diokno and Economic Planning Secretary Arsenio Balisacan said “targeted support programs,” or “targeted relief,” referring to the cash aid and fuel subsidy, would be continued, but did not specify any amount or where the money would come from.

In August, the Department of Budget and Management approved the second tranche of the targeted cash transfer program amounting to P4.1 billion, which was intended to aid more than 4 million of the poorest households in the country.

In addition, more than 158,000 “eligible” farmers and fisherfolk were to receive P3,000 each as fuel discounts then.

Mapa said that last month’s inflation was driven mainly by a faster rate of increases in prices of foodstuffs like meat, vegetables, and fish and other seafood. 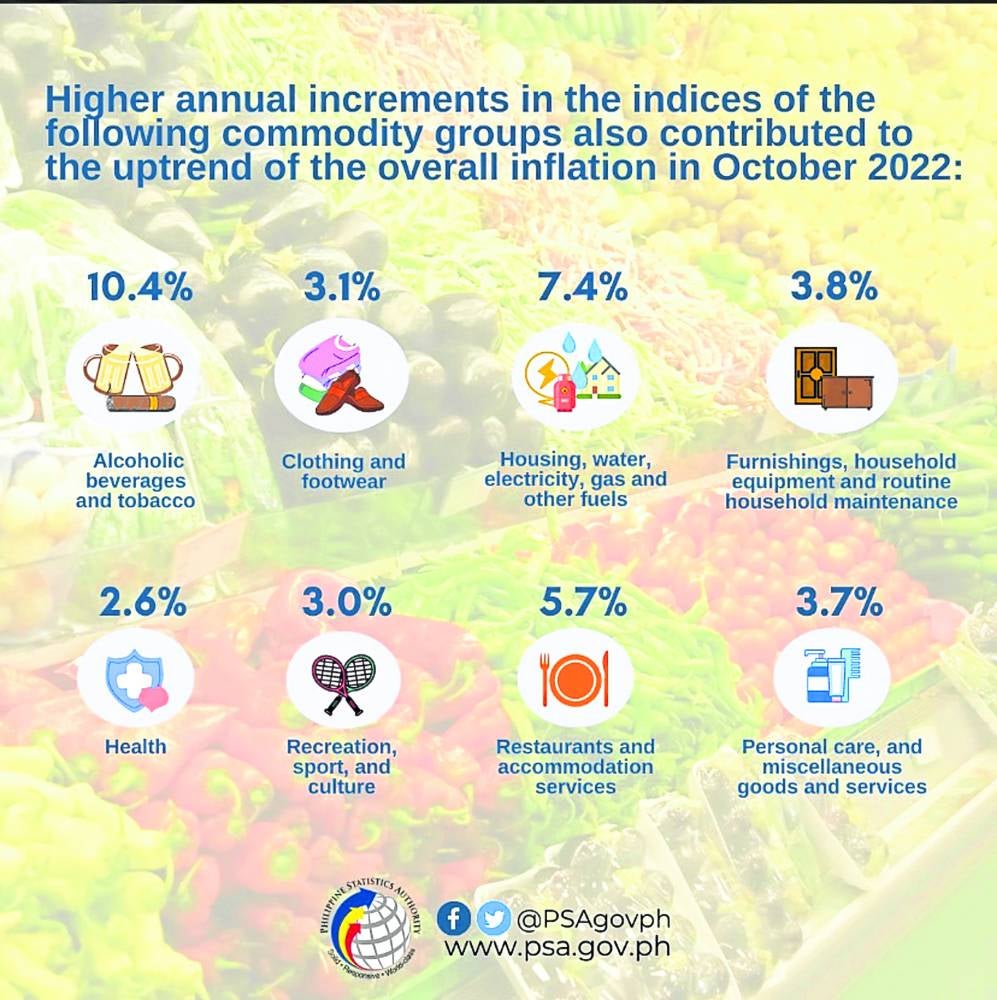 In addition to providing immediate assistance to households that are worst-affected, the government will enable “timely imports” to augment domestic food production, he said.

Filipino consumers feeling the squeeze from high inflation rates and prices increases are expected to cut back on spending, which will then affect local businesses, according to George Barcelon, president of the Philippine Chamber of Commerce and Industry, the country’s largest business organization.

As a reaction to the hikes, people would spend less even if they have relatively more money from year-end bonuses, he told the Inquirer in a phone interview.

“Normally by December, sales pick up by about 30 percent. We might see a lower or a flatter increase,” he said.

“On our side,” Barcelon added, “our concern is that there would be more pressure for wage adjustments.” 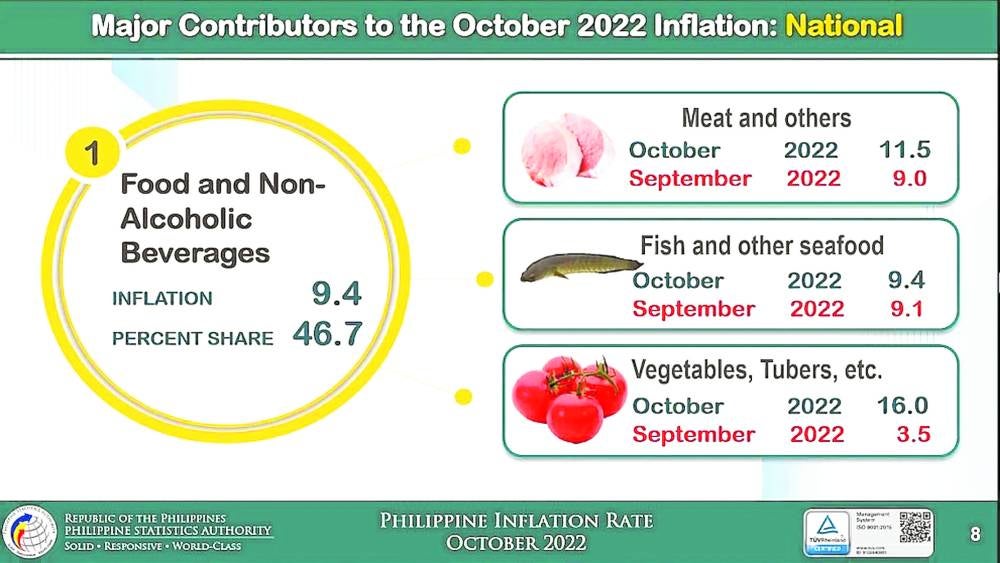 Go Negosyo founder Joey Concepcion said high inflation was a problem of other countries as well and that is because of the interest rate hikes by the US Federal Reserve to rein in their own inflation.

“We are taking a hit because we cannot pass all the cost increases to consumers because that may tank sales, which we cannot have during the fourth quarter but it is the strongest quarter for us entrepreneurs,” Concepcion said.

Alliance of Concerned Consumers in the Philippines convenor Ritchie Horario told the Inquirer that ordinary Filipinos would be cautious in their spending and “will definitely prioritize basic necessities.”

Rights Action Philippines chair Rey Dulay said the government should implement immediate measures to deal with the “alarming” rise in inflation that was hurting the Filipinos’ purchasing power, which could eventually hurt the whole economy.

“Our government cannot just say that we cannot do anything about it and keep on blaming the global trend of inflation,” he said.

Workers’ salaries are not able to keep up with rising prices and what little savings people have are being drained, Dulay said.

Lois Rene Reyes, 36, and his wife, Maria Genesis Catindig-Reyes, 35, have only one child, and they are having difficulty juggling household expenses despite both holding full-time jobs.

“For groceries alone, the things you can buy for P5000 today before, for example, is just equivalent to what you could have bought for P3,000 a few years ago,” Reyes said.

His wife said grocery expenses had doubled and one way they avoid overspending was to stick to their shopping list.

“If we need to restock on fruits, veggies, meat or fish, we will just do a quick run [to the wet market] if there is really a need,” she added.

She said utility bills increased significantly. Their average monthly water bill had risen fourfold from P300 in 2021, she added.

There is still a way for the President to help ordinary Filipinos cope with rising inflation, according to Bayan secretary general Renato Reyes.

He said Mr. Marcos could certify as urgent several pending bills seeking to reduce taxes on basic commodities and to raise workers’ pay.

“The 7.7-percent inflation rate is the highest since 2008 and should compel the government to look into the plight of working people struggling to make ends meet,” Reyes said.

Fernando Hicap, chair of the fisherfolk group Pamalakaya, said the Chief Executive could also support their call for a production subsidy that would cover an individual fishers’ fuel expenses for at least two months amounting to P15,000.

The group also urged the Department of Agriculture, which is headed by the President, to stop the country’s “overdependence” on imports that, with a weakened peso, “pushes up the costs of imported agricultural commodities, including petroleum and fertilizer.”

—WITH REPORTS FROM JULIE M. AURELIO AND MARIEJO S. RAMOS