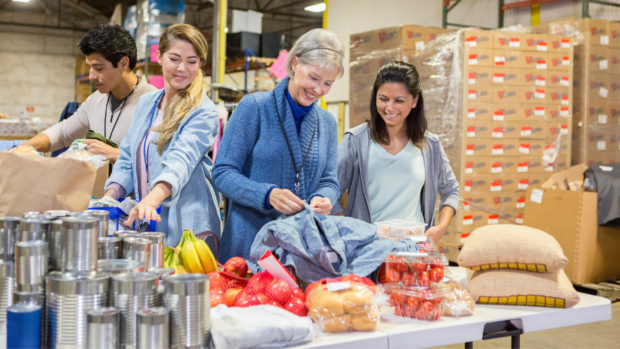 LONDON, United Kingdom — “This absolutely has been a lifesaver to me,” said Michael Cox. The 51-year-old hasn’t eaten in two days and so finally resolved to visit one of Britain’s growing number of food banks providing basic items to those in need.

“I had no money. So I’ll give it a try,” said Cox who before the current cost of living crisis had never before needed to ask for help feeding himself.

Hundreds of people on Monday, October 31, queued in front of the food bank in Hackney in east London armed with a coupon allowing them to collect a basket of three days’ worth of food.

Each receives a mix of goods tailored to their needs and family size, with many of the items donated by members of the public.

The figure went over 10 percent in September, the highest of any G7 country, putting yet more pressure on already stretched household budgets.

“Now with the cost of living crisis, people… can’t pay their bills and buy food. They have to choose one. We are noticing more and more of that, unfortunately,” said food bank supervisor Johan Ekelund.

Sidoine Flore Feumba, a graduate nurse, who receives government benefit payments, says she could no longer afford to feed her three children and heat her home as well.

“Life now is quite difficult. I’m on a universal credit, which is not quite sufficient for my own living, because inflation is rising quite quickly.”

“So I found that that the food bank was my last option to make my ends meet,” she said.

Ekelund said he was worried about the arrival of the cold weather and the prospect of sky-high heating bills suddenly starting to land on people’s doormats.

“I’m really worried for this winter I think it’s going to be a horror show,” he said.

A new food bank – which will open on Friday evenings and cater for those in full time work – will open in December.

A particular rise in the cost of basics was also making the situation even worse, she said.

The price of vegetable oil has gone up by 65 percent in a year while pasta is up 65 percent, two items the prices for which have risen the fastest according to experimental research published by the Office for National Statistics on Tuesday.

Millions of Britons have been reduced to skipping meals, according to a recent poll by the consumer association Which?

It said half of UK households were cutting back on the number of meals they ate, citing a survey of 3,000 people.

The situation of those on benefits was precarious, with many saying they are having to choose between eating and heating.

“The number of people coming and asking for food that they don’t have to cook is ‘shocking’,” said Whitfield.

“And it’s frightening that those requests are going up every single week.”

Another consequence of the cost of living crisis is that people have less money to give to others.

“At this time of the year we’re normally quite busy with school and church harvest collections and donations,” said Whitfield.

But this year schools were preferring to skip the harvest festival collections “because so many parents are struggling and they don’t want to put that added pressure on families,” she said.

With many families who would normally donate to food banks now forced to focus on their own needs, food bank worker Andrew Wildridge said they were just hoping for the best ahead of Christmas.

“Hopefully we could get an increase in the donations,” he said, adding however that the pattern since before the pandemic was for demand to double and donations to halve.