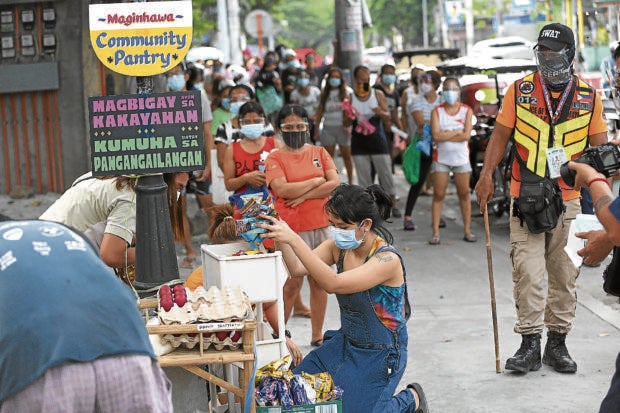 People line up to get free food supplies at the Maginhawa community pantry in Quezon City on Saturday, April 17, 2021, after the project went viral this week as more people donate food stock on a small shelf where underprivileged people can access it but are told to only get what they need.
INQUIRER PHOTO / NIÑO JESUS ORBETA

MANILA, Philippines — The Maginhawa Community Pantry is not just a small bamboo cart containing fresh produce and other food, but a powerful idea that has come out during this time of sweeping pandemic when many Filipinos don’t have the means to feed themselves and their families.

It is no wonder that in just four days, the idea had spread far and wide. From Maginhawa Street in Teachers Village in Quezon City, the community pantry has been replicated in Sikatuna Village also in Quezon City and all the way to Sampaloc, Manila, to as far as Bayombong, Nueva Vizcaya.

The community pantries that had sprung up in various neighborhoods all go by the original Maginhawa tenet of “Magbigay ayon sa kakayahan, kumuha batay sa pangangailangan,” or “Give whatever you can, take only what you need.”

The idea is simple enough. People drop off whatever food they could donate — fresh vegetables, sweet potatoes, canned goods, etc. — at a central location in the community and those who can’t afford to buy their own only have to line up to get what they need for free.

The community effort works as simply as its core principle: Everyone is free to donate as much as he can, but no one should get more than what he needs.

The Maginhawa pantry is open from 6 a.m. to 6 p.m. and is restocked throughout the day, either by donors or by Ana Patricia Non, the young entrepreneur who started it.

In less than a week, the pantry served around 3,000 individuals. Ordinary folks have gone to Maginhawa, a street famous for its holes-in-the wall, to help sustain the cart. In other parts of the metro, as well as in the provinces, ordinary citizens have set up similar pantries on tables or just plain cardboard boxes.

“This is not a charity. This is like a mutual aid. We’re all helping each other,” Non told the Inquirer in an interview on Saturday.

Shortly after the two-week enhanced community quarantine (ECQ) was “modified” in Metro Manila and surrounding provinces, Non scouted for a place where she could set up a pantry where people were free to give and take food.

The 26-year-old furniture business owner said she was concerned for the poor like the jeepney drivers and vendors who were struggling under quarantine restrictions and finding it hard to feed their families during the two-week ECQ.

Her own small shop that makes chairs had suffered a two-month slump due to a localized lockdown and the recent ECQ.

When she got permission to use the sidewalk in front of 96 Maginhawa Street, she brought a bamboo cart with some grocery items she had bought, plus the “ayuda” she had received and opened the pantry on April 14.

She posted what she did on social media and immediately received remarkable responses and praises.

According to sociologist Athena Charanne Presto, a community pantry is the ordinary citizen’s way of taking action in the face of a crisis.

“Community pantries can be seen as acts of resistance against three things: first, against a government that fails to adequately address citizens’ needs; second, against a biased and discriminatory view of the poor as selfish and greedy; and third, against aid initiatives from institutions that are difficult to trust,” said Presto, who teaches at the University of the Philippines.

Presto said the community pantry is also another form of collective response by the people when institutions fall short in providing aid.

But what is important to point out in the Maginhawa community effort is that many of its supporters are not from rich households, she said.

There were farmers who donated a sack of sweet potatoes all the way from Paniqui, Tarlac, and tricycle drivers who volunteered to repack donated rice.

“It goes beyond the mainstream and elitist notion that in donation drives, only the rich provide for the poor,” she said.

The pantry system is built on trust, and Non believes that people will only take what they need and will be patient enough to stand in line to get it.

“I think that we should integrate with basic masses so that we can get to know them, so it can dispel our preconception that they are greedy (let’s focus on those who are truly self-serving and those who owe the citizenry),” Non said on Facebook in response to concerns that some of the poor would take advantage of the free food and get more than what they need.

She said she saw a homeless man who took only two oranges from the cart despite encouragement from other people to get more. The man told them: “This is all I’m going to eat.”

Two street sweepers who each got one head of cabbage said that was just enough for a sauté for their families.

Non observed that some had taken more than what they appear to need, but she withheld judgment.

“Maybe we are not in the right position to judge others when we can afford to eat three times a day. Our struggles and privileges may be different. It’s possible that [the person taking more goods] has a big family, or he lost his job, or he doesn’t know where to get their next meal,” she said.

Non said that she’s happy with how her efforts had been appreciated and adopted, and with how people in communities were uniting to help each other.

At the same time, she was sad that such community pantries had to be established in the first place. They are sprouting in other areas because many people are going hungry and need help to get food, she said.

“This community pantry is only a temporary solution for empty stomachs. Food security, services, those are different things and normal citizens do not have the budget to initiate those big projects,” Non said.

Presidential spokesperson Harry Roque said the community pantry was “laudable” and showed that Filipinos could band together during a crisis.

“It exemplifies the Filipino ‘bayanihan’ spirit during this challenging time of COVID-19,” Roque said in a statement.

“As we have said in numerous occasions, we cannot defeat the COVID-19 pandemic alone. We need the support and cooperation of everyone,” he said.

Roque said the government was giving P1,000 cash assistance each to 22.9 million low-income earners affected by the ECQ in Metro Manila, Bulacan, Cavite, Laguna, and Rizal.

Some government critics see the emergence of community pantries as an indication of inadequate government assistance during the pandemic.

Non noted that some cities and villages have set up community pantries and asked for donations. She discourages that as local governments have money to allocate for the food security of their constituents.

“If people shoulder [the cost of] these projects, that would be redundant because we already shoulder the taxes,” she said.

Non said that the growing number of community pantries was a “wake-up call” that is telling the government about the people’s great need for aid.

The community pantry has been open for less than a week, and Non said that the bamboo cart on Maginhawa Street would stay there as long as there was some food to spare, and someone was in need.

“It can be there every day. Maybe it won’t contain anything for a day, but on the next day, it may have a lot. As long as we have extra food in our homes, I know where I can place that extra food and I know someone who needs it can take it,” she said.