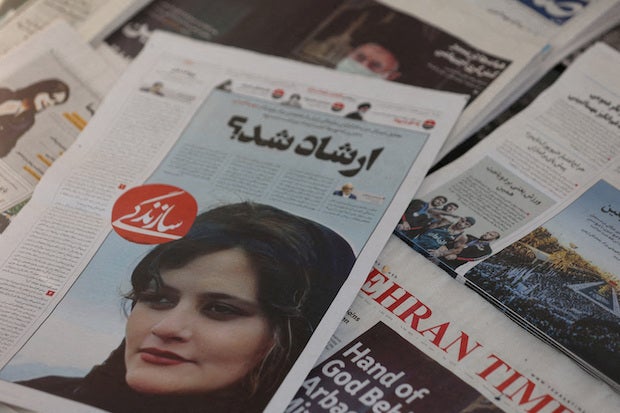 A newspaper with a cover picture of Mahsa Amini, a woman who died after being arrested by Iranian morality police is seen in Tehran, Iran, Sept. 18, 2022. (File photo by MAJID ASGARIPOUT / West Asia News Agency via Reuters)

One of the boldest challenges to Iran’s clerical leaders since the 1979 Islamic Revolution, the almost seven-week-old protests have continued despite a deadly crackdown and increasingly severe warnings, with the Revolutionary Guards bluntly telling demonstrators to stay off the streets.

In a video shared on social media, a woman said her 22-year-old son had been handed a death sentence two days ago in an initial court hearing and appealed for help. The widely followed Twitter account that shared the video, 1500tasvir, said he had been tried by the “rioters’ tribunal.”

Iranian leaders have called the protests a plot by enemies including the United States, vowing tough action against protesters they have described as “rioters.”

Protesters from all walks of life have taken part, with students and women playing a prominent role, waving and burning headscarves since the 22-year-old Amini died in the custody of morality police who arrested her for “inappropriate attire.”

The semi-official Tasnim news agency, citing Tehran’s chief justice, said the trials of about 1,000 people “who have carried out acts of sabotage in recent events, including assaulting or martyring security guards, (and) setting fire to public property,” would take place in a Revolutionary Court.

The trials had been scheduled for this week and would be held in public, it said.

It was not immediately clear if the 1,000 indictments announced on Monday included 315 protesters whom the official IRNA news agency reported on Saturday had been charged in Tehran, at least five of whom are accused of capital offenses.

In the video shared on social media, the mother of 22-year-old Mohammad Ghobadlou said he had been interrogated without the presence of a lawyer.

“My son is ill. Court doesn’t even allow his lawyer to enter the courtroom…They have interrogated him without an attorney present and, in the very first session, sentenced him to death and wanting to execute this ASAP,” said the woman, who did not give her name.

Stepping up warnings against the protesters, Revolutionary Guards commander Hossein Salami warned them on Saturday not to come to the streets, declaring it the “last day of the riots.”

Saeid Golkar of the University of Tennessee at Chattanooga said the warning was a clear message the Islamic Republic saw the protests “as a very regime-threatening event.” Continued protests are a “sign that people are more determined to challenge the regime compared to the past,” he said.

“Unfortunately… history has shown us they are willing to use any level of violence to stay in power.”

Meir Javedanfar, Iran Lecturer at Reichman University in Israel, said the official warnings pointed to growing state concern about the resilience of the unrest, “the fact that despite early predictions by some regime officials, these protests are not dying down.”

The Revolutionary Guards, Iran’s elite military and security force, have yet to be used to quell the unrest. So far, the authorities have mostly drawn on riot police and volunteer Basij militia to crush the protests.

The activist HRANA news agency said on Saturday 283 protesters had been killed in the unrest, including 44 minors. Some 34 members of the security forces were also killed.

Footage shared by 1500tasvir showed people running away from a commemoration in the city of Shahriar near Tehran for a man killed in protests 40 days ago, with a voice saying they were fleeing an attack by security forces. Earlier videos showed dozens of mourners at the gathering, shouting slogans calling for the death of Supreme Leader Ayatollah Ali Khamenei.

Reuters could not verify the footage.

The protests have been fuelled by the deaths of several teenage girls reportedly killed while demonstrating.

On Monday, people chanted against the government during a gathering at the grave of a 16-year-old Kurdish girl killed by security forces in the city of Sanandaj, the capital of Kurdistan province, according to rights organization Hengaw.