Paeng revs up: Signal No. 2 up in 13 provinces, Signal No. 1 in Metro Manila | Inquirer News

MANILA, Philippines — Tropical Storm Paeng (international name: Nalgae) has accelerated as it got closer to the Philippine landmass before noon Friday, the state weather service said.

At 25 kilometers per hour (kph), Paeng was headed west-northwest at a faster speed than the 15 kph recorded early on Friday morning, according to the Philippine Atmospheric, Geophysical, and Astronomical Services Administration (Pagasa).

Maximum sustained winds around its core were still around 75 kph, with gusts reaching up to 90 kph.

Based on the 11 a.m. weather update, the following areas have been placed under Signal No. 2:

Pagasa said these areas could expect gale-force winds which may minor to moderate threat to life and property.

On the other hand, Pagasa’s newest bulletin showed that Signal No. 1 is in effect over the following areas:

Pagasa said these areas could anticipate strong winds which may cause minimal to minor threat to life and property. 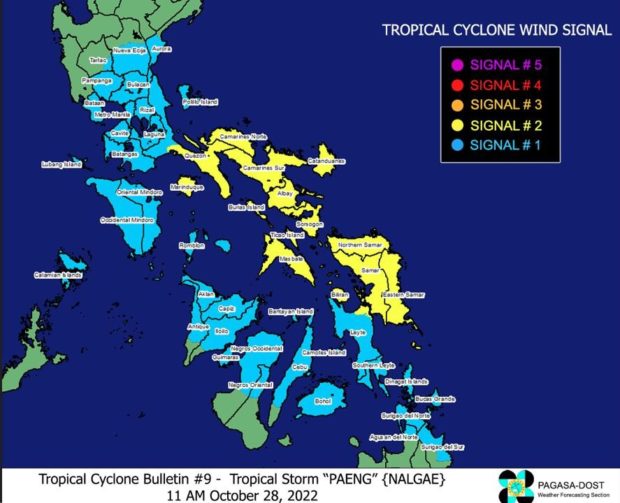 The state weather bureau said Paeng is projected to make landfall in Catanduanes by early morning Saturday and another landfall either in Quezon or Aurora on Sunday, October 30.

Pagasa also said Paeng may no longer strengthen into a typhoon although it is still forecast to intensify into a severe tropical storm tomorrow, October 29.

“Due to a landfall scenario over Bicol Region, it is less likely to reach typhoon category and there is an increasing likelihood that Paeng may remain a severe tropical storm,” it noted.