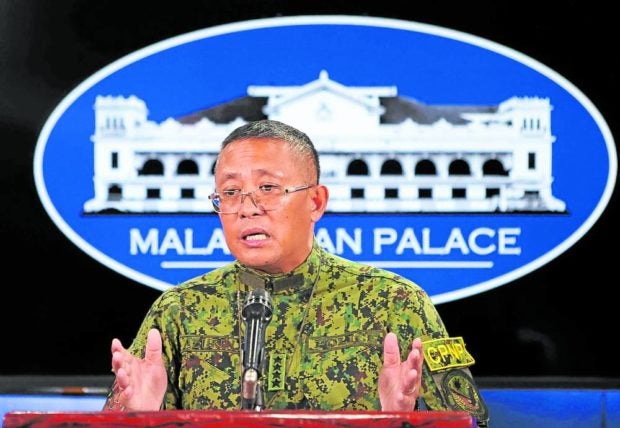 MANILA, Philippines — The Philippine National Police (PNP) has maintained that it adequately informed the Bureau of Corrections (BuCor) that the alleged middleman in the Percy Lapid murder case is detained at the latter’s facilities.

Regarding whether the initial coordination reached suspended BuCor director general Gerald Bantag, PNP chief Gen. Rodolfo Azurin Jr. said during Monday’s press briefing that they are unaware of it.

Azurin was asked about Bantag’s comments that they could have secured the inmate at the New Bilibid Prison (NBP) — a certain Cristito Villamor identified by gunman Joel Escorial as the middleman. In response, Azurin said they did their best to inform BuCor about the developments.

“As I said earlier, because of the urgency and exigency of the ongoing investigation, our police officers made an initial coordination with BuCor.  That’s why our question here is: if our cops failed to directly talk to General Bantag, why did people from BuCor fail to inform Bantag about this if it would not be an issue?” Azurin asked in Filipino.

“So what is their reason, didn’t they see the sense of urgency of an ongoing investigation which we need to resolve? Or if our information and coordination reached Director Bantag, what are the actions he initiated?” he added.

BuCor, an attached agency of the Department of Justice (DOJ), is in charge of managing the national penitentiary.

Bantag, in a report from GMA News’ 24 Oras, last Friday said that BuCor could have secured Villamor had they been informed immediately that he was crucial to the Lapid case. Instead, according to the official, they were only informed of the inmate’s identity after he died.

Azurin said he understands that the coordination should have been made between Interior Secretary Benjamin Abalos Jr. and Justice Secretary Jesus Crispin Remulla, as PNP and BuCor are attached agencies of the Department of the Interior and Local Government and the DOJ, respectively.

However, the urgency of the matter prompted police investigators to go straight to BuCor about the middleman identified by Escorial.

“So, that’s why I have been saying that it is confusing why this unfortunate thing happened to the middleman when we had made initial coordination. Of course on the part of the PNP, we regret what happened to the reports crafted by our investigator on the case but what’s done is done. So, we have to continue our investigation,” he noted.

Earlier too, Azurin said the PNP is doubtful about the circumstances of the alleged middleman’s death, saying that the timing of his passing was questionable. He also voiced expectations regarding how BuCor could have handled the matter, as the agency was quick to say that a certain Crisanto Villamor was not detained at the NBP.

However, it appears that Villamor’s true name is Cristito and not Crisanto, which is why his name did not emerge from the NBP’s database. Azurin suggested that BuCor should have segregated all individuals carrying the name Villamor so that Escorial could positively identify who the middleman was.

During the October 18 press briefing where Escorial was presented to the public, he claimed that “someone from Bilibid” gave the orders to kill Lapid. He did not name the person during the briefing, but on the same day, the middleman died.

Lapid was gunned down at the neighborhood gate where he lived last October 3. After his death, several groups and public officials called for a thorough probe, stressing the need to protect journalists from threats due to their line of work.

READ: Percy Lapid burial: ‘May his death be like the planting of a seed’