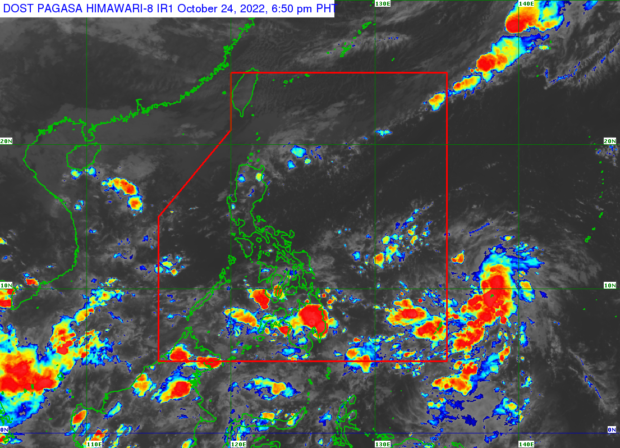 MANILA, Philippines — A low pressure area (LPA) being monitored east of Visayas may escalate into a tropical depression within the next 48 hours, said the Philippine Atmospheric, Geophysical and Astronomical Services Administration (Pagasa) on Monday.

According to Pagasa weather specialist Grace Castañeda in Pagasa’s latest weather advisory, the LPA was last spotted 995 east of Visayas.

(This low pressure area currently has no direct effects on our country, but it has the possibility of developing and becoming a storm within the next 48 hours.)

She also noted that the LPA may make landfall in the country’s land mass, depending on its track in the next following days.

(Uncertainty is still quite high and big changes are still possible, but we see the possibility that starting Wednesday it is possible that its trough will cause rains in parts of the Visayas and Southern Luzon.)

Meanwhile, rain will continue in parts of Northern Luzon, specifically, Ilocos Norte, Cagayan Apayao, Isabela, and Batanes due to the effects of the northeast monsoon, locally known as “amihan.”

The rest of Luzon, on the other hand, including Metro Manila, will have slightly cloudy to cloudy skies with isolated rain showers due to localized thunderstorms.

Scattered rain showers are then forecast over parts of Central and Eastern Visayas, as well as Caraga Region, while the rest of Visayas and Mindanao will have fairer weather with chances of isolated thunderstorms.

Due to the effects of amihan, gale warning is raised over Batanes, Cagayan (including Babuyan Islands), Ilocos Norte and Ilocos Sur.