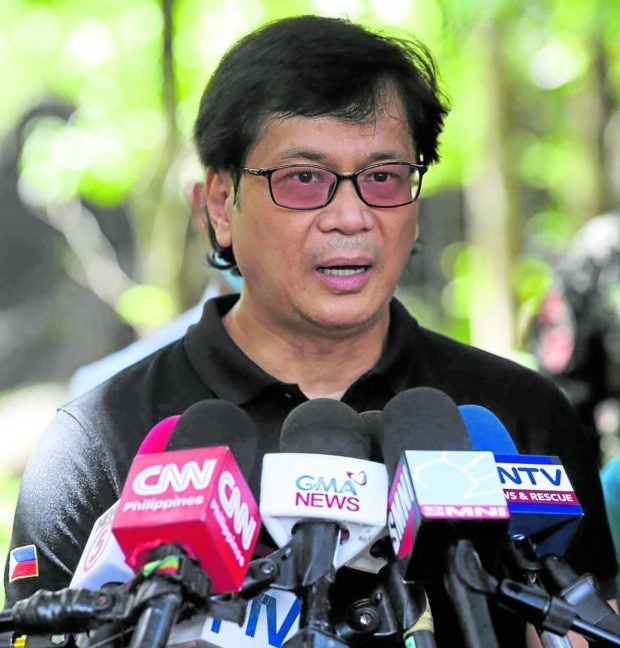 An inmate at New Bilibid Prison (NBP) who could have identified the mastermind of the killing of radio broadcaster Percival “Percy Lapid” Mabasa has died, officials said on Thursday, three days after the confessed gunman who pointed to him as the “middleman” in the assassination plot surrendered to the police.

Interior Secretary Benhur Abalos and police officials refused to give details about Crisanto Palana Villamor, who was reported “dead on arrival” at the NBP hospital at 2:05 p.m. on Oct. 18, just hours after the alleged gunman, Joel Escorial, was presented to the public in a news conference.

The officials on Thursday declined to answer most of the reporters’ questions and did not say why the death wasn’t disclosed sooner.

Without identifying Villamor by name, Escorial had said that someone “inside Bilibid” contracted the hit on the tough-talking radioman-vlogger for P550,000.

He said he received P140,000, but surrendered on Monday, fearing for his life after Abalos and the Philippine National Police warned the still unknown gunman then to surrender as he may be eliminated by the mastermind of the murder.

Facing reporters at the Philippine National Police headquarters in Camp Crame on Thursday evening, Abalos said an autopsy was ongoing on the remains of Villamor, whose cause of death was listed as “undetermined” by prison authorities.

“In truth, we truly regret what happened. I hope everyone understands that the police worked so hard on this case,” he said. “Once we learn that there is foul play here, we will really get mad, we’ll be very furious. We are demanding that those responsible will be held to account.”

Abalos said Escorial, 39, was still in police custody and assured the public that he “is in very safe hands.”

In a photo released by the Criminal Investigation and Detection Group, Escorial was said to have positively identified the body of Villamor, who was 42.

Police Brig. Gen. Kirby John Kraft, chief of the Southern Police District, did not respond when asked how the gunman was able to identify Villamor when they only spoke on the phone.

In addition to Villamor, there was “a second middleman,” who was identified as Christopher Bacoto and now in the custody of the Bureau of Jail Management and Penology at an undisclosed detention facility facing drug charges, Kraft said.

He said they had already secured Bacoto.

‘Inducement’ worth P550,000According to the Department of Justice (DOJ), Escorial, Bacoto, Israel Dimaculangan and his brother Edmon, and a certain Orly or Orlando “planned and executed” the assassination with the “inducement” of Villamor who promised to pay them P550,000.

The DOJ said that Escorial’s inquest for murder noted that the two Dimaculangan brothers and Orly were charged as respondents but Villamor and Bacoto were not.

Roy Mabasa, the slain broadcaster’s younger brother who is also a journalist, was disheartened.

He said that the death of the alleged middleman despite his request to keep the suspect safe deeply saddened and greatly concerned his family.

“We do not know how the case will progress [when] the supposedly vital personalities who know about my brother’s killing are dying,” Mabasa told the Inquirer in a phone interview.

Calling on the President

He said his family was waiting for the national police and the Bureau of Corrections to determine who was at fault in Villamor’s death.

Mabasa said he believed he was right in calling on President Marcos from the start to lead the investigation of his brother’s murder.

“We did not see any sincerity in his response to the killing of Ka Percy Lapid. For what reason, I do not know. Nothing has come out from his lips about the importance of Ka Percy’s case,” he said.

After meeting Escorial personally on Tuesday night at a walk-through of the crime scene at the gate of BF Resort Village in Las Piñas City, Mabasa told reporters he was convinced that the confessed assassin was the person who shot his brother.

Unknown to him that Villamor was already dead at the time, he had called on the authorities to keep the alleged middleman safe as he would be able to lead them to the mastermind of the killing.

“This is like a drama that is unfolding in front of everyone, and we all know how it will end,” he said. “This shows a large-scale operation against my brother who only wanted to speak the truth, a journalist who tackled important issues.”

His 63-year-old brother, a sharp critic of former President Rodrigo Duterte and the policies and officials of the Marcos administration, was shot twice to the head on Oct. 3 while driving to his studio in Las Piñas City to broadcast his “Lapid Fire” program on dwBL radio station that is livestreamed on his YouTube and Facebook accounts.

“We wasted Ka Percy’s life. We wasted all the public expectations that justice for his murder would be served,” Mabasa said.

He said the death of Villamor was a “huge blow” to the case but he was hopeful that “other angles” would point, even indirectly, to those behind the assassination of his brother.

Mabasa killer warned: ‘Many people know you; give up’

Philippines among worst countries for journalists in Southeast Asia — IFJ