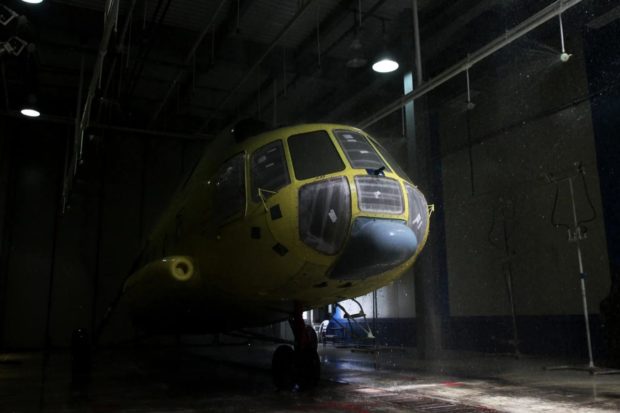 FILE PHOTO: A Mi-17 helicopter is seen during the leak test at Kazan Helicopter Plant, a subsidiary of Russian Helicopters, in Kazan, Russia, on August 24, 2020. REUTERS/Alexey Nasyrov

MANILA, Philippines — The administration of President Ferdinand Marcos Jr. is not inclined to restore the Philippines’ purchase of 16 Russian military helicopters which deal his predecessor had terminated.

According to the President, the country has already “secured an alternative supply from the [United States].”

“I think it has already been determined by the previous admin that that deal will not carry through, will not go on. Now we have secured an alternative supply from the US, through the manufacturer in Poland,” he said in an interview with reporters on the sidelines of the 48th Philippine Business Conference and Exposition 2022 at the Manila Hotel.

“In any case, mayroon na tayong kapalit (We already have a replacement),” Marcos added.

Marcos also said that the Philippine government is hoping to negotiate with Russia in order to get even a portion of the downpayment it has paid for the scrapped chopper deal.

“We are hoping to negotiate to at least get a percentage of it back. But the deal, as it stood, maybe [at] the beginning or the middle of last year, has already been canceled and we have secured another alternative supply for those helicopters that we need,” he said.

Marcos made the remarks in response to the call of Russia for the Philippines to honor the agreement for the acquisition of 16 Mi-17 helicopters.

Russian Ambassador to the Philippines Marat Pavlov said Thursday that Russia “is continuing to fulfill all the obligations” to provide the Philippines military choppers through continuous production.

In November 2021, the Philippine government agreed to pay P12.7 billion ($228 million) for the military helicopters, as it seeks to modernize its military hardware.

Manila paid P1.9 billion as downpayment for the transaction in January this year.

But days before President Rodrigo Duterte ended his term, his administration canceled the order for Russian military helicopters in fear of US sanctions amid the Russia-Ukraine conflict.