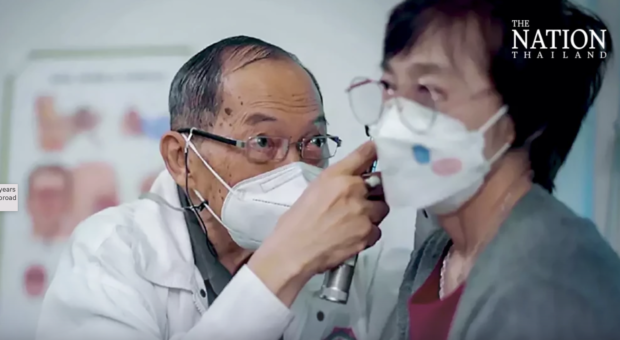 BANGKOK — An ENT specialist from Rajvithi Hospital, Soontorn Antarasena, will receive a diplomacy award from the Foreign Ministry for his devotion to treating ear infections of more than 70,000 underprivileged people in 10 foreign countries for over 30 years.

The Foreign Ministry and Thailand Foundation announced that Soontorn, from the Department of Otolaryngology, Rajvithi Hospital, would be the first Thai to receive the Public Diplomacy Award.

The award ceremony will be held at the Foreign Ministry on Thursday.

The foundation announced that Soontorn was chosen for the honor because of his devotion to helping poor people who suffered ear infections in over 80 cities in 10 countries over the past 30 years.

It is not the first time Soontorn would be receiving a prestigious award. In 1996, he was honored with “Distinguished Award for Humanitarian Efforts” from the American Academy of Otolaryngology-Head and Neck Surgery. He also received the National Award for his distinguished achievements in developing quality of life in 2002.

Soontorn recounted that he was motivated to help the underprivileged who suffered from ear infections over 40 years ago when he returned to Thailand and found that the Kingdom had very few otolaryngologists.

“When I returned to Thailand, the country had fewer than 20 otolaryngologists, very few indeed, while a lot of people suffered from acute otitis media.

“So I invited friends to form a small group of volunteer doctors and we used our own money to treat people in the provinces.”

Soontorn said he and his friends treated the poor with ear infections in Thailand for over 10 years before he started going out to help the poor in foreign countries.

His first trip was to Kunming in China. His team then visited Myanmar and Cambodia to treat ear infections.

“We have been doing it for over 30 years. We focus on treating the poor in Thailand’s neighboring countries to boost ties between Thailand and those countries,” Soontorn said.

He recounted that his team had encountered a lot of obstacles in foreign countries, especially restrictions on importing medical tools and medicines.

Before each trip, Soontorn and his wife would visit and survey the destination to prepare everything — from accommodation to surgery room, food and interpreters.

He said the host countries would announce a month ahead of the visit for its citizens to avail of free treatments for ear infections.

Soontorn recounted that on the first treatment day, over 1,000 patients would wait in line and many would even faint, as some of them had to walk across mountains to the venue.

Several times, his team met with obstacles, including road accidents, landslides and floods. Once, a doctor in the team became ill and needed intravenous feed.

He explained that acute otitis media was caused by chronic flu symptoms that resulted in congested air passage between the ear canal and throat, causing the middle ear canal to trap liquid that eventually damaged the eardrum.

He said if the infection spreads to the brain, the patient could die.

Of the many memorable cases, he said he was moved by the case of a young girl in Bhutan who became suicidal because of her condition.

“The girl, who rarely heard any sound, came for a check-up. She was depressed because her friends rarely talked to her. After our team gave her a hearing aid, she could hear more clearly and she shed tears of joy. She hugged our doctors and said that she had once thought about committing suicide because of her condition. When we saw a patient get a better quality of life, our team quickly got over the tiredness and carried on working,” Soontorn recounted.

The doctor added that next year, he would lead his team to treat the poor in Victoria Point in southern Myanmar, Santikhiri village in Cambodia, and a Laotian town near Uttaradit province of Thailand.

Eye doctor gives gift of sight to the poor