Eye doctor gives gift of sight to the poor 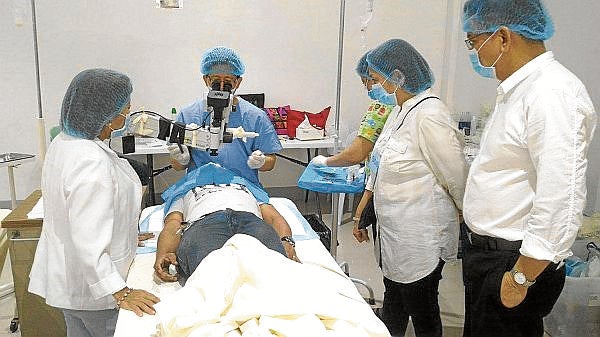 VOLUNTEERWORK Members of Raise Me Up, a group that organizes outreach programs for the poor, observe Dr. Mario Reyes (second from left) while he performs cataract surgery on a
patient. —CONTRIBUTED PHOTOS

In the case of Dr. Mario Reyes, an ophthalmologist, he speaks about God’s compassion and mercy by aiding the poor who cannot afford to see eye specialists.

Reyes, backed with 33 years of professional practice, has been conducting surgical eye missions in different parts of the country for free.

He had a choice to spend most of his time in an air-conditioned clinic, attending to patients and earning through professional fees. Instead, this 63-year-old eye doctor chose a different path.

“I’m but a hardcore Catholic who is open to helping all [members of] religious denominations. I simply want to do something for the poor,” he told the Inquirer.

The Inquirer witnessed Reyes in action shortly before the pandemic struck last year. Garbed in a surgical gown and armed with incision instruments, Reyes sits on a chair and does cataract surgery on a patient during one of his many medical missions. In 15 minutes, the procedure is over.

He took a few minutes to rest before attending to another patient while about more than a dozen others waited for their turn.

His primary patrons are those suffering from cataract who have no money to spend for surgery, which may cost around P50,000 for a single eye.

“That is very expensive, isn’t it? The way I see it, nobody—like the ones I cater to—can get that kind of amount. They went to hospitals and were asked to produce that amount. I felt bad about it,” Reyes told the Inquirer. 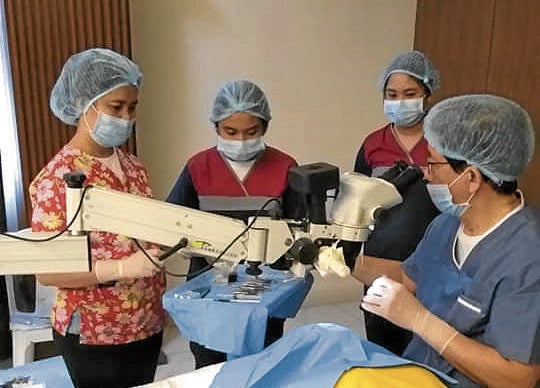 PASSION TO SERVE Dr. Mario Reyes says his passion to serve the less fortunate is inspired by his parents and mentors in medical school. In one of his medical missions in Cebu, Reyes is assisted by volunteers who, he hopes, will also share their skills and talent to help others.

“I thought about it and said, ‘Why don’t they come to me, to the mission, and everything will be free including the eyedrops.’ You spent nothing but the time you spent with me and the mission,” he added.

Without enough money for surgery, many people with cataract end up blind.

But Reyes said he wanted to stir hope where there is despair and fear. “They have to be treated for them to see [again],” he said.

Before the COVID-19 pandemic struck, Reyes, a native of Manila, had been conducting free cataract surgeries in different churches in Cebu City.

In one occasion, he successfully removed the cataracts of 112 patients at the Archdiocesan Shrine of St. Therese of the Child Jesus in Barangay Lahug. At the Our Lady of the Sacred Heart Parish on Escario Street in Cebu City, he treated 125 patients—again, for free.

“While looking into their eyes, all are beautiful. The corneas are pristine, and I could see the happiness in their faces,” he said after inspecting the eyes of his patients three weeks after the surgery.

Reyes partners with Raise Me Up, a Catholic organization that provides help to the poor.

In conducting medical missions, Reyes gets help from Eye Hear Foundation, a nongovernmental organization based in Bacolod City that assists doctors who treat patients for free. 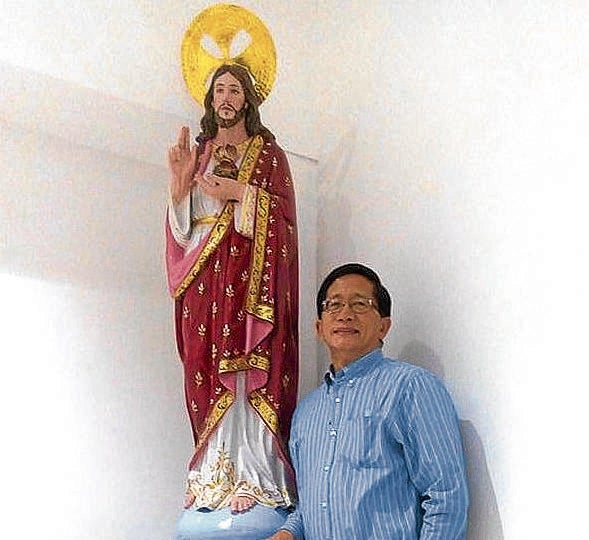 PROUD CATHOLIC Dr. Mario Reyes describes himself as a hardcore Catholic
but says his faith does not come in the way of helping those with different beliefs.

Reyes earned his degree in medicine at the Far Eastern University. He then went on to study ophthalmology at Ospital ng Maynila Medical Center.

He passed the board examination for ophthalmology in 1995. In the same year, he went to the United States for further studies at the Spencer Thornton Eye Institute in Nashville, Tennessee.

Reyes has served as consultant for Ospital ng Maynila Medical Center. As a veteran ophthalmologist, he has been invited to speak in different medical forums in India, Indonesia and the United Arab Emirates.

“I did live surgery techniques for other doctors who want to learn my techniques in doing volumes of surgery in a fast and quality way,” he said.

Reyes’ passion in conducting eye surgeries for free began while he was still an ophthalmology trainee in Manila.

It was his mentor, Dr. Romeo Espiritu, who instilled in him the value of using the profession to help the poor.

“He (Espiritu) said [medical] missions were the kindest thing you could do to your fellow. You reach out to people without accepting anything in return. I took that as a very good blessing from him. When I finished my ophthalmology studies, I continued what he [instilled in] me to do. And I discovered the skills that the good Lord had given me,” he added.

He said his parents had also played a big part in inspiring him to help other people, especially those in need.

Reyes, whose three children now help his wife in running a family business in Manila, has a radio program in the Church-run Radio Veritas entitled “For Your Eyes Only.”

When asked about professional jealousy that may arise due to his free services that may take patients away from other doctors and clinics, Reyes said: “That is a good thing to say because I am not doing anything that can harm their practice. I am not getting anything out of this. I just want to help patients that cannot afford their (other doctors) services.”

“Also, I don’t think I’m touching on their private practice. I am not stealing from them because I don’t even get even a single centavo for this. All those who cannot afford come to me and I treat them for free. Those who can afford it, go to them. So it’s a win-win solution. I get what they are not treating,” he said.