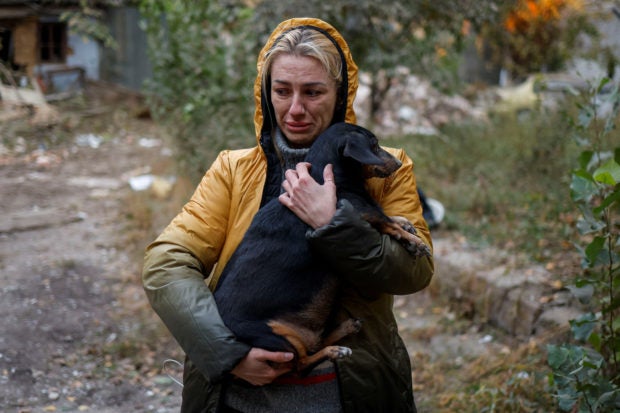 A woman carries a dog at the site of a residential building heavily damaged by a Russian missile strike, amid Russia’s attack on Ukraine, in Mykolaiv, Ukraine October 18, 2022. REUTERS

KYIV/MYKOLAIV, Ukraine — Russia has destroyed almost a third of Ukraine’s power stations in the past week, President Volodymyr Zelensky said on Tuesday, as Moscow rained more missiles down on infrastructure in what Kyiv and the West call a campaign to intimidate civilians.

Missiles struck power stations in the capital Kyiv where they killed three people, and in Kharkiv in the east, Dnipro and Kryvyi Rih in the south, and Zhytomyr in the west, causing blackouts and knocking out water supplies. One man was killed in his flat that was destroyed in Mykolaiv in the south.

“The situation is critical now across the country … The whole country needs to prepare for electricity, water and heating outages,” Kyrylo Tymoshenko, deputy head of the Ukrainian president’s office, told Ukrainian television.

Russia has openly acknowledged targeting Ukraine’s energy infrastructure with waves of missile and drone strikes since the start of last week, in what President Vladimir Putin said was legitimate retaliation for a blast on a bridge.

Kyiv and the West say intentionally attacking civilian infrastructure is a war crime, and the attacks, aimed at leaving Ukrainians with no heat and power as winter arrives, are Putin’s latest tactic to escalate a war his forces are losing.

In a rare acknowledgement of the difficulties Russian forces are facing, their new commander Sergei Surovikin on Tuesday described the military situation in Ukraine as “tense”, especially around the occupied southern city of Kherson.

The Russian-installed chief of the Kherson region said some civilians from four towns would be evacuated, citing what he said was the risk of an attack by Kyiv’s forces.

In Mykolaiv in southern Ukraine, Reuters heard three explosions in the early hours of Tuesday. A missile completely destroyed one wing of a building in the downtown area, leaving a massive crater. A fire crew was seen pulling the dead body of a man from the rubble.

The Russians “probably get pleasure from this,” said Oleksandr, the owner of a nearby flower shop.

Zelensky said Russia was continuing to try to terrorise and kill Ukrainian civilians.

“Since Oct. 10, 30% of Ukraine’s power stations have been destroyed, causing massive blackouts across the country,” he wrote on Twitter.

Zelensky reiterated his refusal to negotiate with Putin who he says heads a “terrorist state”.

Zelensky ruled out negotiations with Putin last month after the Russian leader announced the annexation of four Ukrainian provinces. Putin has also called up hundreds of thousands of reservists and threatened to use nuclear weapons since mid-September, after his forces faced humiliating battlefield losses.

There was no immediate word on how many people were killed in Tuesday’s strikes overall. A day earlier, Russia sent swarms of drones to attack infrastructure in Kyiv and other cities, killing at least five people.

Moscow denies deliberately targeting civilians, though it has pummeled Ukrainian villages, towns and cities in what it initially called a “special military operation” to disarm its neighbor.

The Russian defense ministry repeated earlier statements that it was carrying out attacks using high precision weapons on what it described as military targets and energy infrastructure across Ukraine.

Ukraine accuses Russia of using Iran-made Shahed-136 ‘kamikaze drones’, which fly to their target and detonate. Iran denies supplying them and on Tuesday the Kremlin also denied using them.

However, two senior Iranian officials and two Iranian diplomats told Reuters that Tehran had promised to provide Russia with more drones as well as surface-to-surface missiles, a move sure to infuriate the United States and its allies.

The U.S. State Department said Washington would continue to take “practical, aggressive” steps to make the sale of drones and similar weapons harder, and also expressed concern about what it called the deepening alliance between Russia and Iran.

Ukrainian Foreign Minister Dmytro Kuleba said he would ask Zelensky to formally cut diplomatic ties with Iran in protest over the drones.

Nato will deliver air defense systems to Ukraine “in the coming days” to help the country defend itself against drones, the alliance’s secretary-general Jens Stoltenberg said.

General Surovikin, Moscow’s new overall commander in Ukraine, has been nicknamed “General Armageddon” in Russian media after serving in Syria and Chechnya, where his forces pounded cities to rubble in a brutal but effective scorched earth policy against its foes.

His appointment was quickly followed on Oct. 10 by the biggest wave of missile strikes against Ukraine since the start of the war.

Putin cast those strikes as revenge for an explosion that damaged Russia’s bridge to Crimea – the peninsula Moscow seized from Ukraine in 2014. Kyiv has not claimed responsibility for that attack but celebrated the destruction of what it considers a military target used to transport arms and troops.

British Armed Forces minister James Heappey told BBC Radio that Surovikin was pursuing a cruel and pointless strategy that he said would fail in its aim of trying to “break the will of the Ukrainian people”.

The Kremlin said on Tuesday that the four Ukrainian regions it claims to have annexed were under the protection of its nuclear arsenal.

The statement comes as both Nato and Russia prepare to hold annual military exercises to test the readiness of their nuclear weapons forces. Russia’s defense ministry said on Tuesday two of its nuclear-capable Tu-95MS strategic bombers had conducted a flight of more than 12 hours over the Pacific Ocean, the Bering Sea and the Sea of Okhotsk.

Putin has previously said he is prepared to use nuclear weapons if necessary to defend Russia’s “territorial integrity”.