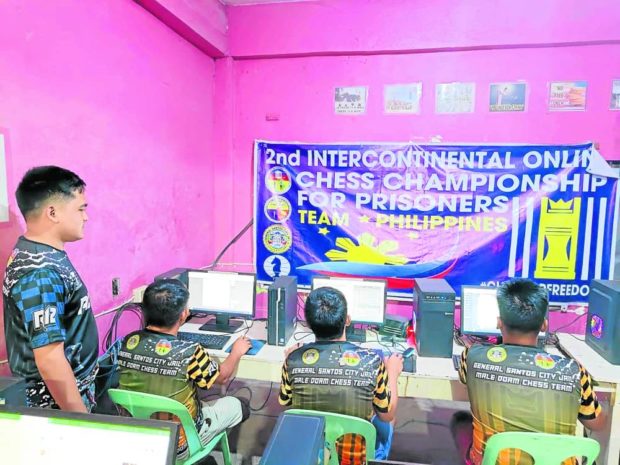 GENSAN GAMBIT Members of Team Philippines from General Santos City Jail plot their next move en route to the championship on Monday night. —photo FROM Bureau of Jail Management and Penology

MANILA, Philippines — After making it only to the Top 5 last year, the Philippine team captured the championship in a global chess tournament — one that is played long-distance, online, and from behind bars.

For third place, the team from India defeated prisoners from El Salvador.

Instead of the usual one-on-one battle, the tournament makes the play on the computer screen a team effort. Since the names of the team members cannot be fully disclosed, the Bureau of Jail Management and Penology (BJMP) on Tuesday identified them only as Romel, 35; Wilvit, 37; Ali Mar, 46; Nilo, 46; and Ramos, 37. The last PDL served as a reserve during the finals.

The games were livestreamed on Chess TV and on the official YouTube channel of the International Chess Federation (Fide).

Organized by Fide, the competition is the biggest of its kind in the world. Special certificates will be awarded to the members of the winning teams.

In the inaugural tournament last year, the GenSan City Jail also represented the Philippines and was composed of the same players, who then finished fifth overall.

The Philippine coach, Jail Officer 1 Cedrix Cabangal, said he was confident early on that his team would bag the championship this time around. “I saw [their] potential; they are very competitive and determined to join again and become champions,” he said.

To further improve its chances, the team also received some training from Filipino chess masters Winston Silva (who is now based in Thailand) and Srihaan Poddar, FIDE said.

In a statement, BJMP Director Allan Iral was all praises for the GenSan players. “The whole BJMP family is very proud of the success of our PDL in the recently concluded second Intercontinental Online Chess Championship for Prisoners.”

“Despite their situation, the PDL chess players and their coach JO1 Cabangal did not disappoint… We salute them for their excellence, determination and skill that is truly world class,” Iral said.

Mongolia was the men’s division champion during the 2021 tournament, but it was eliminated early in this year’s edition. The Mongolian women’s team, however, won the title in their division this year, where it outplayed Serbia in the finals.

The match for third place in the women’s division—between England and Trinidad and Tobago—was not played due to technical reasons. Both just shared third place.

In a message to all the players, Fide president Arkady Dvorkovich said: “We all hope that at some moment of your life, you will be free to make your own choices, and chess will help you to make those choices rationally.”

Dvorkovich earlier served as deputy prime minister of Russia from 2012 to 2018.

Over 85 teams from 46 countries participated in this year’s five-day tournament, which started on Oct. 13, the International Day of Education in Prisons. The first staging last year had 42 teams representing 31 countries.

The Intercontinental Online Championship for Prisoners is organized by Fide as a part of its “Chess for Freedom” program launched in May last year. It aims to introduce chess as a tool for education and social inclusion in the prisons of different countries, and is administered under the patronage of former world champion Anatoly Karpov.

Jail that produced dancing inmates to produce boxers, too