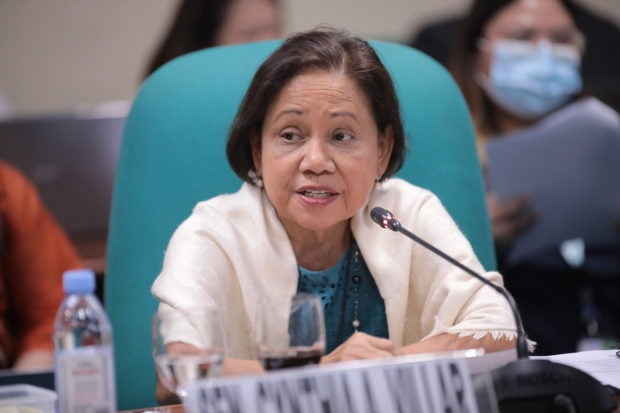 MANILA,  Philippines — Senator Cynthia Villar was in disbelief that the bulk or 80 percent of the proposed 2023 Department of Agriculture (DA) budget would go to the agency’s programs.

“Parang mali’ yan. Inilipat mo sa programs’ yung other classifications,” Villar said while DA officials were presenting their budget proposal of P163.7 billion during the hearing of the Senate subcommittee on finance on Tuesday.

(I think that’s wrong. You transferred the other classifications to programs.)

“Baka minis-classify ninyo ‘yan. I want to see the breakdown, there’s something wrong here,” she continued.

Villar recalled that in the past, the agency’s proposed overhead had even reached 61 percent of the budget so she proposed to reduce it to only 50 percent.

(And now you’re saying the overhead is 20 percent, including research and regulatory? That’s impossible. There’s something wrong.)

DA Undersecretary Rodolfo Vicera then asked the senator if they could just make another presentation on Wednesday to address her question.

But Villar went on explaining that she just wants to see a general idea of how the agency is spending its budget for next year.

She reiterated that the DA’s breakdown of the budget was “very different” from the presentation by different administrations.

(Your budget for programs is too high. No department has allocated 80 percent for the program. It isn’t easy to have 45 percent and 55 percent for PS and overhead. How come your  [budget for] programs  is 80 percent?)