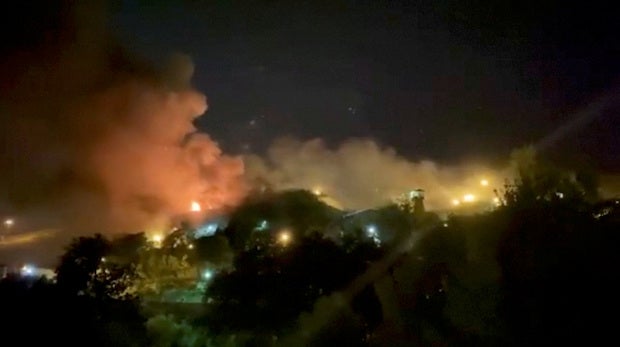 A view of smoke rising from Evin Prison in Tehran, Iran, Oct. 15, 2022 in this still image take from a video obtained by Reuters.

DUBAI — A fire at Iran’s Evin Prison late on Saturday killed four detainees and injured 61, state media reported, as anti-government protests sparked by a woman’s death in police custody continued on Sunday, including at several universities.

Iranian authorities said on Saturday that a prison workshop had been set on fire “after a fight among a number of prisoners convicted of financial crimes and theft.” Evin holds many detainees facing security charges, including Iranians with dual nationality.

Iran’s judiciary said four of those injured in Saturday’s fire were in critical condition and that those killed had died of smoke inhalation, Iranian state media reported.

Earlier state television aired a video apparently showing that calm had returned to the facility.

Protests sparked by 22-year-old Mahsa Amini’s death on Sept. 16 have turned into one of the boldest challenges to Iran’s clerical rulers since the 1979 revolution, with protesters calling for the downfall of the Islamic Republic, even if the unrest does not seem close to toppling the system.

Demonstrations continued at several universities on Sunday, including in the cities of Tabriz and Rasht, to a heavy deployment of riot police. Videos posted on social media showed students at a Tehran university chanting: “Iran has turned into a big prison. Evin prison has become a slaughterhouse.”

Reuters could not independently verify the footage.

Families of some political detainees took to social media to call on the authorities to ensure their safety at Evin prison, which in 2018 was blacklisted by the US government for “serious human rights abuses.”

Footage of the prison aired on state television hours later showed firefighters inspecting a workshop with fire damage to the roof. It also showed inmates asleep in their wards.

Atena Daemi, a human rights activist, said that relatives of prisoners held in the women’s section had gathered at the prison for routine visiting hours, but that the authorities had denied them access, resulting in a standoff.

Relatives were told that the prisoners were “fine, but the phones are broken,” according to Daemi. However, she later tweeted that some women prisoners had called their families.

A lawyer representing an American Iranian held at Evin, Siamak Namazi, imprisoned for nearly seven years on espionage-related charges rejected by Washington as baseless, said on Sunday that Namazi had contacted his relatives.

Several other dual-national Iranians and foreign citizens are held in Evin prison mostly for security-related charges.

“SiamakNamazi has now spoken to his family. He is safe and has been moved to a secure area of Evin Prison. We have no further details,” lawyer Jared Genser said in a tweet.

The husband of Iranian journalist Niloofar Hamedi, who broke the news of Amini’s hospitalization and was arrested last month, also wrote on Twitter that she had telephoned him on Sunday.

Asked about the prison fire, US President Joe Biden told reporters during a campaign trip on Saturday to Portland, Oregon that the Iranian government was “so oppressive” and that he was surprised by the courage of the Iranian protesters.

France said on Sunday it was following with the utmost attention the situation at Evin prison, “where several French nationals are being arbitrarily detained.”

“France once again reminds the Iranian authorities that they are responsible for the safety and health of our compatriots detained in Iran,” a French foreign ministry spokesperson said in a statement, repeating a call for their immediate release.

Protests have been met with a brutal state crackdown. Rights groups said at least 240 protesters had been killed in the anti-government protests, including 32 minors. Over 8,000 people had been arrested in 111 cities and towns, Iranian activist news agency HRANA said on Saturday. The authorities have not published a death toll.

Among the casualties have been teenage girls whose deaths have become a rallying cry for more demonstrations across the country.

Iran, which has blamed the violence on enemies at home and abroad, denies security forces have killed protesters. State media said on Saturday at least 26 members of the security forces had been killed by “rioters.”

The clampdown on protests has attracted international condemnation, with the United States, Canada, and some European countries imposing sanctions on Iranian officials and organizations they accuse of being involved.