Another fuel price hike seen amid fears of global recession 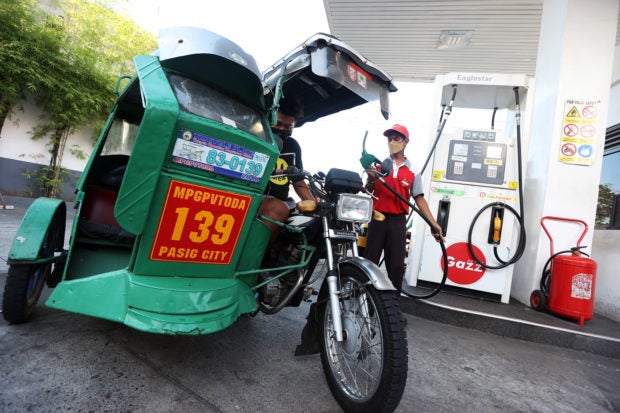 MANILA, Philippines — Oil companies are expected to jack up domestic fuel prices for the second straight week, but less than the increases it slapped last week, according to industry sources.

Unioil said in an advisory that the price of diesel may go up by P2.60 to P2.80 per liter and gasoline by 80 to 90 centavos per liter.

Another source made a similar projection, seeing diesel prices increase by P2.40 to P2.70 per liter while that of gasoline by 50 to 80 centavos per liter, based on the average Mean of Platts Singapore (MOPS) trading from Oct. 10 to Oct. 14.

In the West, oil prices plummeted more than 3 percent on Friday amid fears of a global recession and weak oil demand, especially in China, Reuters reported on Friday.

European and US contracts oscillated between positive and negative territory for much of Friday but fell for the week by 6.4 percent and 7.6 percent, respectively.

The drop was due to the announcement that US core inflation recorded its biggest annual increase in 40 years, reinforcing views that interest rates would stay higher for longer with the risk of a global recession.

The next US interest rate decision is due on Nov. 1 to Nov. 2.

Fears of a global recession was more acute in Europe, particularly Germany, after Economy Minister Robert Habeck reported that Europe’s largest economy would likely head into recession in 2023 because of the Russia-Ukraine War.

Habeck told reporters Germany would shrink 0.4 percent next year rather than grow by 2.5 percent as initially expected. Growth forecasts for 2022 have also been adjusted downward to 1.4 percent, from a previous forecast of 2.2 percent.

“The numbers are bad,” said Habeck, arguing that the data could have been worse had the government not taken “the steps we have taken.”

The world’s second-largest economy, China, has also slowed down in the first half of the year and if official growth figures for July to September show a contraction, economists predict increased chances of a global recession.