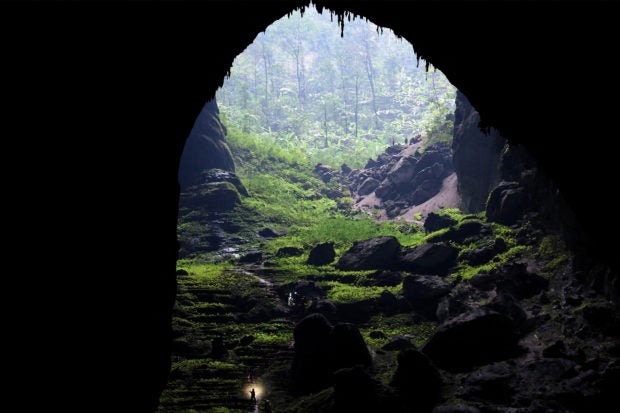 This photograph taken on January 18, 2021 shows visitors in Son Doong cave, one of the world’s largest natural caves, during a tour in central Vietnam’s Quang Binh province. AFP

According to Wonderlist: “Son Doong is the world’s largest cave that is formed by the erosion of limestone underneath the mountains by the river water, and causing the ceiling to collapse, thus creating huge natural skylights.

“The cave hides a whole world inside it, with its own river, jungle and climate. Some of the world’s tallest stalagmites are found here.

“The solutional cave has a large calcite wall called ‘The Great Wall of Vietnam’, behind which were found abnormally large cave pearls the size of baseballs. It is a popular tourist spot, now, with its vastness providing a humbling experience,” Wonderlist wrote.

Originally discovered in 1991 by a Vietnamese man called Ho Khanh, Son Doong Cave is located in the Phong Nha-Ke Bang National Park, Quang Binh, and was recognised as a world natural heritage site by Unesco.

It was surveyed by the British Royal Cave Research Association (BRCA) in 2009. Measuring a total of 38.5 million cubic metres, Son Doong Cave is currently the largest natural cave in the world, recognized by Guinness in 2013.

The cave has become the backdrop for many internationally famous programmes like Good Morning America of US channel ABC in 2015, or MV Alone Pt II by British-born Norwegian DJ Alan Walker in 2019, which has promoted it as a new symbol of Vietnam’s tourism sector.

Adventure travellers can book a tour exploring the largest cave on the planet via Oxalis, the only private company licensed to launch tours to Son Doong Cave. The Son Doong tour is open from January until the end of August, with a maximum of 100 groups, with 1,000 guests as the total limit.

Visitors who are interested but have not yet had the opportunity to visit can explore the place through Wonders of Vietnam – an online exhibition on Google Arts & Culture launched in early 2021.