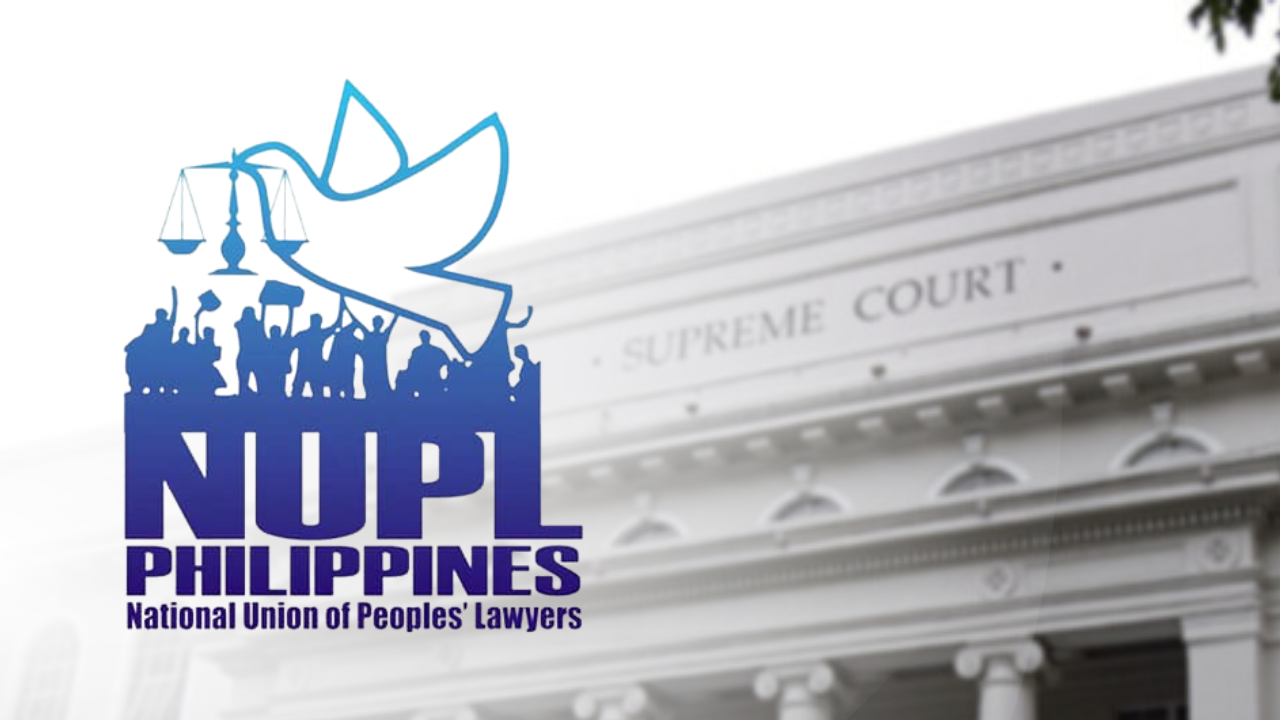 MANILA, Philippines — The National Union of Peoples’ Lawyers (NUPL) on Friday urged the Supreme Court to reverse the Court of Appeals’ decision and grant them protective writs following continuous red-tagging of its members.

“To reiterate, as an equitable relief, petitioners pray that respondents be ordered to cease and desist from red tagging and vilifying petitioners,” read the manifestation filed Friday.

On August 2019, the NUPL filed a petition for review against the Court of Appeals’ July 2019 ruling dismissing their plea for a writ of amparo and habeas data.

The Court of Appeals said the writ of amparo, in its present form, the coverage of the remedy is confined to two instances — extralegal killings and enforced disappearances.

It also reiterated the statement by the Office of the Solicitor General which pointed out that leftist organizations have participated in governance and even won electoral exercises over the last 50 years and thus said, “It is speculative for petitioners to claim that all members or supporters of leftist organizations are in danger of neutralization as enemies of the state.”

NUPL in its manifestation said: “While the instant Petition is pending before this Honorable Court, Petitioner NUPL and its members have experienced and continue to be subjected to malicious vilification, real threats and vicious harassment in different forms and platforms.”

“Your officers of the court are respectfully seeking succor before we, as endangered species, become extinct,” they added.

They mentioned that since 2021, two of their members were killed — Rex Jesus Mario Fernandez in Cebu City and Juan Macababad in Soccsksargen while lawyer Angelo Karlo Guillen survived an attack.

They added that several of their lawyers have reported surveillance from the military and the police.

Meanwhile, some of its officers and members were also recently accused by former NTF-ELCAC spokesperson Lorraine Badoy as among those who helped Manila Regional Trial Court Judge Marlo Magdoza-Malagar in writing her decision dismissing the government’s bid to call the Communist Party of the Philippines-New People’s Army (CPP-NPA) as a terrorist organization.

The group said since they first filed their petition in April 2021, they recorded 176 incidents of prima facie profession or work-related attacks against lawyers, but since then, they documented at least 41 more incidents.

“The serious and continuing threats against Petitioners and other NUPL members and the failure to condemn and prosecute these acts of violence is an act of injustice in itself which equally erodes public trust and confidence in our justice system,” they said.

“From the foregoing circumstances, it is evident that the respondents and their agents are responsible for the attacks on NUPL and its members and done with their acquiescence, behest, and blessing. The continuous and intensifying threats to life, liberty, and security of the Petitioners resulting [in] killing, threat, harassment, surveillance and demonization, and red-tagging must be put to an end,” the NUPL said.

“For the foregoing reasons, and considering that the parties already argued their respective positions and filed all the necessary pleadings, the Petitioners humbly submit that the Petition is now ripe for resolution,” they added.