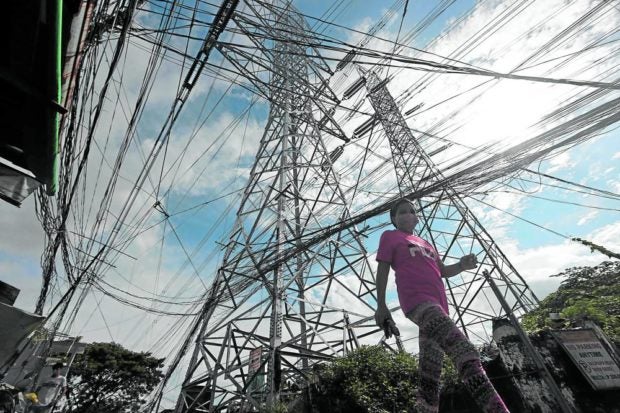 A woman walks past a transmission tower in Caloocan City. —GRIG C. MONTEGRANDE

The National Association of Electricity Consumers for Reforms Inc.’s (NASECORE) president Pete Ilagan said that Meralco’s suppliers, South Premiere Power Corporation (SPPC) and San Miguel Energy Corporation (SMEC), both applied for joint motions for a price adjustment on May 11, 2022, at the ERC, which would raise the generation rate from P4.045/kWh to P5.41/kWh.

However, Ilagan said that the Meralco suppliers’ average rate continues to rise because the same clause did not restrain Meralco’s other suppliers that SPPC and SMEC had.

The denial “does not explain why Meralco’s average or blended rate continues to rise astronomically, reaching P6.9393/kWh on September 22. The reason is SPPC and SMEC are only two of the 12 Meralco suppliers, with the rest continuing to charge sky-high rates without any kind of restraint,” explained Ilagan.

Ilagan said that it was the Quezon Power Philippines Ltd Co. charging the highest rate P13.34/kWh, which is more than double of SPPC and SMEC’s rates. The advocacy group added that electric cooperatives in Leyte and Samar also increased generation rates in September.

“As it is, consumers are saddled with ERC-approved [power supply agreements] that allow outrageous increases in the generation charge but disallow supply in the least cost manner,” said Ilagan.

NASECORE has appealed to Marcos to intervene and urge the ERC to resolve this issue.

“In behalf of the 20 million electricity consumers subject [to] NASECORE’s advocacy, we respectfully ask you to urge the ERC to resolve this anomalous situation as soon as possible,” they appealed to Marcos.

ERC to restore ‘balance’ in transmission regulation with rates reset