Fake news persists because ‘people in power feed it’ – Colmenares 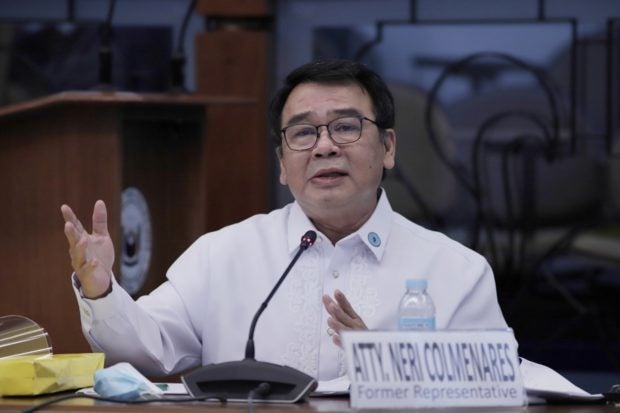 MANILA, Philippines — Fake news continues to be a problem because “people in power feed it,” former Rep. Neri Colmenares said in a statement issued on Wednesday.

Colmenares, chair of Bayan Muna which he used to represent in the House, agreed with the finding of a recent Pulse Asia survey that almost 86 percent of Filipinos consider fake news to be a problem.

Over half of the respondents said that most of the false information about government and politics came from social media influencers, bloggers, and vloggers.

“Yes, this is true indeed, especially for us in Bayan Muna who are always the target of fake news and red tagging,” Colmenares said in a mix of English and Filipino.

“The findings of Pulse Asia that many people believe that fake news is a problem is indeed a reflection of reality. The problem of fake news is growing because people in power feed it and are continuously feeding it through hired trolls or creating vlogs and posts with dubious content. It is inherent upon real journalists and the public at large who strive for the truth to combat this scourge of the digital age,” he added.

Bayan Muna has been a constant fixture in the House of Representatives, winning three seats in the 18th Congress. But it did not get a single seat in the 19th Congress, which the group’s officials attributed to fake news.

Just before the May 2022 national elections, then Rep. Carlos Zarate of Bayan lamented the circulation of a fake resolution claiming that his party-list group and others in the Makabayan bloc had been disqualified.

Colmenares, who ran for senator in the 2022 polls, was also rumored to be disqualified. The Commission on Elections clarified that it had not released any resolution disqualifying the groups.

Despite the Pulse Asia survey touching on several details, Colmenares found it lacking in some aspects. For example, it did identify those who were targeted by misleading information.

“Though dapat pinaghiwalay ang government vs politics sa tanong to avoid skewed answer/interpretation. ex: inflation is a governance matter, not politics. So are there fake news about inflation? Or about total na utang ng Pilipinas,” Colmenares said.

“I think they should have separated government and politics to avoid skewed answers and interpretations — for example, inflation is a governance matter, not politics. So are there fake news about inflation? Or about the total loans of the Philippines?

“What about inpolitics? Are there more fake news against the opposition? Or for the allies of the president? If you separate all these, the answers and interpretation would be clearer,” he added.

—WITH A REPORT FROM ALYSSA JOY QUEVEDO (TRAINEE)