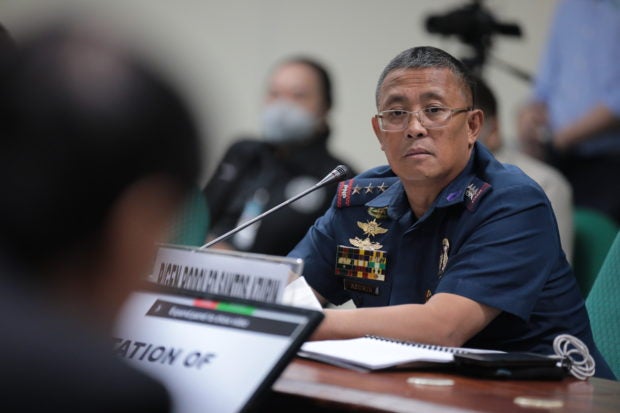 Azurin made the admission amid questions on how the three detainees, who were members of the terrorist Abu Sayyaf Group (ASG), got hold of an improvised sharp object made from a metal fork, which was used to stab a police officer and take De Lima hostage.

“There must really be a lapse on the part of our PNP in guarding our detainees,” he said over ABS-CBN News Channel. The PNP chief added that police investigators were still determining how the suspects obtained the deadly weapon, as metal objects were prohibited from being brought inside the custodial facility.

Azurin said he had ordered security tightened to ensure that no detainees would have access to objects that could hurt anybody.

The hostage-taking incident on Sunday resulted in the death of the three ASG members — Feliciano Sulayao Jr., Arnel Cabintoy, and Idang Susukan — who were all hot dead by responding police officers. De Lima survived unscathed.

Police Cpl. Roger Agustin was bringing breakfast to the detainees at around 6 a.m. when one of them stabbed him repeatedly with a metal fork, leaving him critically wounded.

De Lima, who called her being held hostage a near-death experience, has chosen to remain in the PNP Custodial Center, saying she felt safe and secure there.

A day after the hostage-taking, the facility resumed normal operations with Azurin saying that “if it warrants us to recalibrate our standard operating procedure, then we will implement the appropriate adjustments.”

He added that the PNP would now implement a “buddy system” among duty police guards to ensure that the detainees in their care would not dare attack them as a group.

De Lima’s bail hearing on Monday in the Muntinlupa Regional Trial Court Branch 256 was reset after prosecutors noted that she was a close contact of Interior Secretary Benhur Abalos, who earlier tested positive for COVID-19 but remained asymptomatic.

President Ferdinand Marcos Jr., meanwhile, would leave the former senator’s fate to the courts following growing calls for her release after the hostage-taking incident.

Undersecretary Cheloy Velicaria-Garafil, the officer in charge of the Office of the Press Secretary, said on Tuesday that Marcos would also take a hands-off stance on a proposal to grant De Lima home furlough.

Asked about persistent calls for the Department of Justice (DOJ) to drop the drug charges filed against the former senator, she replied: “We’ll leave it up to the courts to decide if she’s going to be freed based on the evidence or merits of her case.”

De Lima, one of the staunchest critics of the Duterte administration, has been detained since February 2017 on drug charges.

The president said over the weekend that he would speak to De Lima “to check on her condition and to ask if she wishes to be transferred to another detention center.”

Marcos’ sister, Sen. Imee Marcos, has urged De Lima to accept the offer of home furlough, which she said was made by the DOJ and PNP in July.