DENR gets scolding for reclamation projects 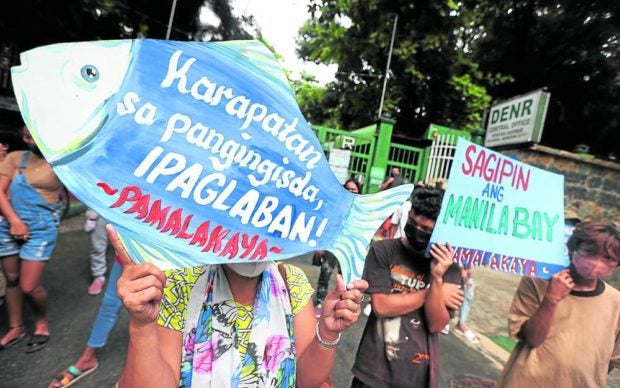 STAKEHOLDERS | Members of activist group Pambansang Lakas ng Kilusang Mamamalakaya ng Pilipinas (Pamalakaya) troop to the main office of the Department of Environment and Natural Resources in this Aug. 5, 2022, file photo, as they called on the agency to take a tougher stand against reclamation projects in Manila Bay. (File photo by NIÑO JESUS ORBETA / Philippine Daily Inquirer)

MANILA, Philippines — Senators on Tuesday castigated the Department of Environment and Natural Resources (DENR) for approving 21 proposed reclamation projects on Manila Bay despite the environmental harm they may bring to Metro Manila and its neighboring localities.

At the budget briefing of the DENR, Sen. Cynthia Villar, who chairs the Senate committee on environment and natural resources, scolded DENR officials who disclosed that the agency had issued environmental compliance certificates (ECCs) to 21 projects without proper consultation with stakeholders.

“[Former Public Works Secretary Rogelio Singson] had told me never to agree to any reclamation project there because it will cause flooding in southern Metro Manila by a depth of 6 to 8 meters — [which is] as high as a three-story building,” she said.

The issue arose on questioning by Sen. Nancy Binay, who said that from her Senate office window, she often spots barges pouring sand in the middle of Manila Bay.

Villar was visibly upset after DENR officials said some of the approved projects are at the Las Piñas-Parañaque Wetland Park, a protected area.

“I had talked to Bacoor [officials] and they told me they would not proceed with it. I want to know if they are proceeding with it because I ha[d] warned them that if they go beyond Cavitex (Manila-Cavite Expressway), we will see each other in court,” she said, adding that any project near the Cavite coast will block four rivers that drain into Manila Bay: the Parañaque, Las Piñas, Zapote, and Molino rivers.

“For what reason will I spend 10 years of my life cleaning 30 kilometers of the river if you’re just going to block it? I worked hard and spend so much on this, that’s why I’m so passionate about it,” she said.

‘You have no shame!’

Hinting that the project was tainted with corruption, Villar bawled out at Environmental Management Bureau (EMB) Director William Cuñado for supposedly reviving an ECC for the reclamation project long after it expired.

“Why did you revive it? It’s because huge amounts of money flowed,” she said.

Villar said she was not invited in EMB public consultations and hearings on the proposed reclamation projects.

“We have been trying to take care of our cities, and now you come here and approve these projects without even telling us? You have no shame!” she said in Filipino.

She told Cuñado: “Don’t you dare do that to me! We don’t know anything about (those projects). You came from Cebu, and now you come (to Manila) and create a mess here.”

Sen. Joel Villanueva also questioned the motive for the project approvals, some of which are also feared to pose environmental hazards to his home province of Bulacan.

“So the million-dollar question is: what prompted (the EMB) to reclaim the area?” he said.

Undersecretary Jonas Leones explained that the DENR is not the sole government agency that approves reclamation projects.

He also said the reclamation projects were approved by the Office of the President during the Duterte administration.

Villar disputed this, saying that Presidents Benigno Aquino III and Rodrigo Duterte had told her they did not know anything about the projects.

“I will talk to President Marcos about this as I have talked to all presidents about the reclamation. It took me 10 years to clean my river, and now you just block its flow?” she said.

Yulo-Loyzaga gave the committee her commitment that the DENR will undertake a review of its policies on reclamation.