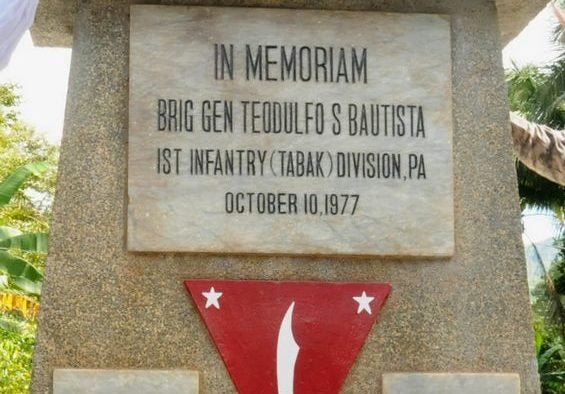 A stone marker in Danag, Patikul, Sulu in honor of 33 Army soldiers killed on Oct. 10, 1977 in what is now referred to as the Patikul massacre. ARMY PHOTO

JOLO, Sulu, Philippines — Amid a drizzle on a gloomy Monday, Army troops gathered at a sculpted bust of a man in a combat helmet inside the Army’s 11th Infantry Division (ID) headquarters in Barangay Bus-bus here.

They offered a wreath of fresh chrysanthemum and aster at a stone marker near the bust, on which the names of 33 soldiers are etched.

Some 20 kilometers away, in Barangay Danag in Patikul town, the Army enlisted men and officers were massacred by Moro rebels on Oct. 10, 1977, while waiting for a dialogue to take place.

“Every year, we make it a point to commemorate the heroism of 35 officers and enlisted men. They sacrificed their lives not just for the troops but for the people of Sulu,” said Maj. Gen. Ignatius Patrimonio, commander of the 11th ID, whose camp was named in honor of Bautista.

“His legacy will always be remembered not only by the security forces but also by the people of Sulu. He is an epitome of a great leader who has shown his heart and passion in attaining peaceful co-existence for the sake of the people and the province of Sulu,” Patrimonio added.

Patrimonio said Bautista’s example would be a useful “guide towards our common vision of sustainable and real inclusive peace in the province of Sulu.”

Retired Army Maj. Roberto Parayno said the memories of the tragic incident had been painfully etched in his heart. He was the duty sergeant of the Army Artillery Group assigned at their camp in Bud Datu, Indanan town during the incident.

Parayno recalled that Bautista and Sali first agreed to meet inside the military camp in Barangay Bus-bus for the peace talks. Sali asked that they meet instead at the Danag public market, to which Bautista “agreed without doubts.”

Going to the meeting, Bautista boarded two military trucks, which were unarmed as a sign of goodwill. There was nobody in sigsht when they arrived in Danag, Parayno said.

“They waited for Sali, oblivious to [the danger of] death. They were massacred. The troops were mercilessly shot and hacked,” Parayno recalled.

Only one soldier, Cpl. Oliver Calzada, survived the attack by playing dead, he added.

A memorial was erected in Danag as well as in Bus-bus, with the names of the soldiers.

Apart from Bautista, the names of the other officers were as follows:

Following are the names of the enlisted personnel:

Former Jolo Mayor Hussin Amin acknowledged that the incident was painful — “especially to our soldiers and to the families of those who died 45 years ago.”

“The Tausugs would like to remember their heroism. What they sacrificed on that day, Tausugs enjoy the peace today,” he added.

“We deeply value those lives that were sacrificed and if you see Sulu in general, the people themselves, the Tausugs, are very dedicated in preserving the peace. The military did the right decision to tap Tausugs as soldiers, they know the people and the (local) dynamics,” Amin added, referring to the Army’s recruitment of Sulu natives in its ranks.

Patrimonio said there were countless men and women who “paid the price for peace, and those they left behind hope it was not in vain. The violence in Patikul will always remind us of the great contribution of our soldiers to achieve peace for the next generation of Sulu to enjoy.”

Alfidzra Maharail, secretary of the Patikul Municipal Council, said: “In behalf of the people of Patikul, Sulu, we honor the late Brig. Gen. Bautista and his men for their sacrifices in achieving peace not only in Patikul, but in the entire province of Sulu. We will, therefore, continually support the military in their peace and security campaign in the province.”

What Went Before: The 1977 Patikul masscre