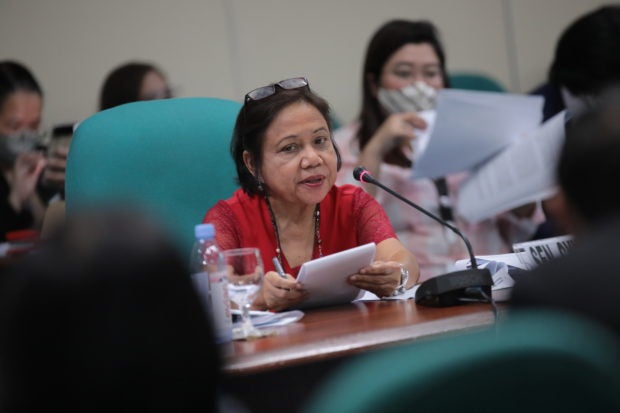 MANILA, Philippines — Senator Cynthia Villar on Tuesday fumed upon learning that there are several reclamation projects along Manila Bay, which she said, could submerge two million households in Southern Metro Manila.

Villar, who chairs the Senate committee on environment, natural resources, and climate change, was incensed when she learned that the reclamation projects near the Manila-Cavite Expressway or Cavitex was given environmental compliance certificates by the Department of Environment and National Resources (DENR).

Environmental Management Bureau Director William Cuñado drew Villar’s ire after revealing this during the Senate Committee on Finance hearing for the budget of DENR.

(Don’t do that to me; stop that nonsense. You came from Cebu and disturbed us here.)

(Since you are from Cebu, go to Cebu and disturb that City; leave us alone. We just want to live a quiet life here.)

Villar, citing former Department of Public Works and Highways Secretary Babes Singson, said the reclamation would cause six to eight meters of flooding, equivalent to a three-storey building. The senator further said this would affect two million households in Metro Manila.

“We have four rivers going out of that [Manila] Bay, where will the river go, the water of the river go?” The senator said.

(What was that? You are all shameless. Even if you know that that will cause flooding, you do not want to stop.)