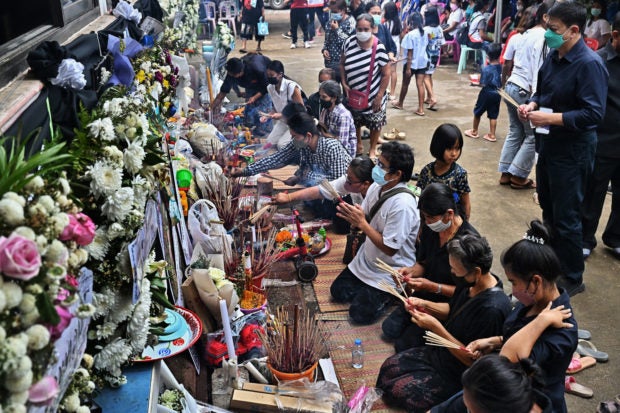 People pray for the victims of the nursery mass shooting at Wat Rat Samakee temple in northeastern Nong Bua Lam Phu province on October 10, 2022, as relatives hold funeral rites for those killed in the massacre. AFP

BANGKOK — Two members of a CNN media crew have been arrested in Udon Thani for allegedly encroaching at the crime scene of the Nong Bua Lamphu nursery massacre on Sunday.

Australian reporter Anna Coren, 47, who reported from inside the nursery, and her British cameraman Daniel Hodge, 34, have been escorted to Na Klang Police Station, which has jurisdiction over the crime scene.

Danaichoke said the CNN broadcast had taken a serious toll on locals, especially the victims’ relatives.

The CNN crew broadcast graphic images from inside the nursery, prompting public anger and accusations from Thai media that it had violated journalistic ethics.

The Immigration Bureau has also revoked the tourist visas of Coren and Hodge, explaining that reporting without a media visa is a criminal offense.

Immigration Bureau deputy commissioner Achayon Kraithong said they were not eligible to work in the country, the Bangkok Post reported.

He said their encroachment on the crime scene may have tampered with evidence and disrupted the work of investigators, and that they could face other charges.

The pair arrived at Suvarnabhumi airport on Thursday and were permitted to stay until Nov 19. They have not left the country, the officer added.

Thai police have circulated a video of a @CNN team apologizing for filming inside the Nong Bua Lamphu nursery at the center of the #กราดยิงหนองบัวลำภู mass shooting. It looks like a hostage video to those unfamiliar, but this is typical Thai – and not necessarily in a good way. https://t.co/ZJReWFIrMN

Thai police on Sunday circulated a video of the CNN crew apologizing for filming inside the nursery.

CNN is accused of encroaching at the scene in Uthai Sawan subdistrict, where a 34-year-old ex-policeman launched a gun and knife attack that left 36 dead, including 24 young children.

The CNN broadcast went viral online amid controversy over how the outlet gained access to the scene to broadcast graphic images including bloodstains and the young victims’ belongings.

The outlet defended its crew in a Twitter message on Saturday, claiming they had received permission from Thai public health officials to enter the crime scene.

34 people killed in mass shooting at daycare center in Thailand