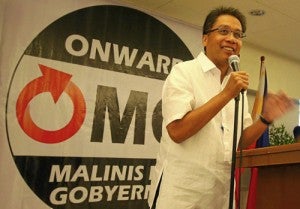 “Noynoying,” a play on the President’s nickname “Noynoy,” is a new protest form characterized by lazing around, also known as the new planking.

Roxas expounded on the newly coined term for over three minutes.

Inquirer Lifestyle columnist Gilda Cordero-Fernando tackled the same issue in her column on Sunday titled “Noynoying also means … trying to govern a country that has so many opinions.”

Roxas cited the case of the last National Economic and Development Authority board meeting where Mr. Aquino, for nearly eight hours, went through 13 projects costing approximately

P150 billion with his executive family.

He said the President asked each member of the Cabinet where and how the funds would be spent, if the spending would be for the best and if the project had been well studied. That, Roxas said, is what Noynoying means.