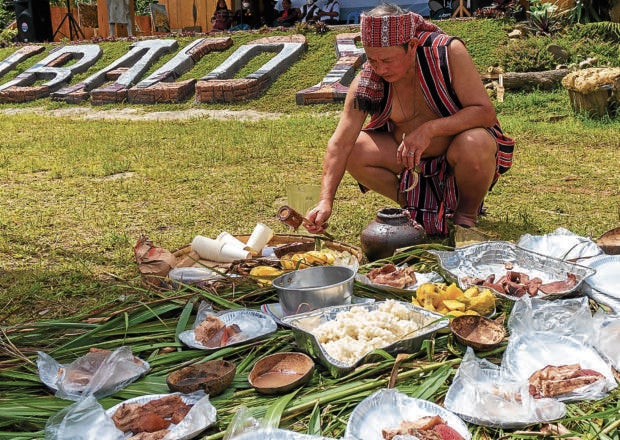 FIRST CITIZENS | Elder Felix Siplat offers prayers during an Oct. 2 festival that gathered
22 Ibaloy clans at Burnham Park in Baguio for a “tonton” (tracing of roots) in order
to review their family trees and establish their ancestral lines among the original settlers
of the city, then known as Kafagway. (Photo by NEIL CLARK ONGCHANGCO)

BAGUIO CITY, Benguet, Philippines — Tourists who frequent Baguio City remember it for its parks and roads named after its “founding fathers,” such as Chicago architect Daniel Burnham, who designed this colonial hill station that was built at the beginning of the 20th century by the country’s American governors.

At one time or another, every visitor has ridden a boat on the man-made lake that still bears Burnham’s name.

But if tourists venture further into inner city neighborhoods, they will discover streets named after what are arguably its actual forefathers — Baguio’s first Ibaloy dwellers.

Sepic Road, for instance, down the hill behind Baguio City Hall, is named after Sepic, a 19th century trader who used to raise cattle until the American government issued a public sanitation decree that forced him to move his herd away from the city center.

Carantes Street, an interior city road that is being converted into a pedestrian alley because of its murals, is also the name of a prominent Baguio Ibaloy clan.

Since Oct. 2, Ibaloy descendants have been gathered at Burnham Park’s Ibaloy Gardens for a month-long “tonton” (tracing of roots) to enrich or refine their respective genealogies.

Organized by the Onjon ni Ivadoy, an association of Ibaloy communities, through an Ibaloy festival, the tonton allows families to display their family trees and share their oral histories with the young, said theater artist Lynette Carantes-Bibal, one of the tonton’s facilitators.

The families also explored possible ties with other clans that could bind them further as a people, she said. 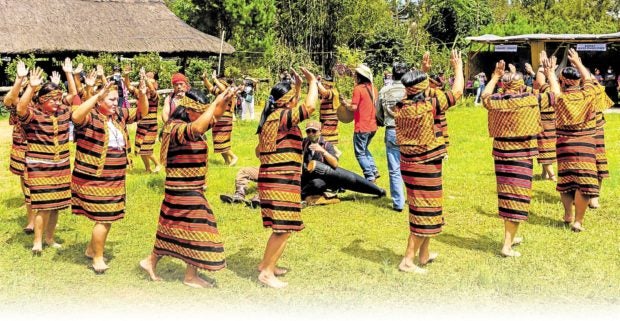 Carantes-Bibal cited clan elder Victoria Tumbaga, who brought numerous scrolls filled with the names of Ibaloys who lived as far back as the clan could remember.

About 22 Ibaloy clans in Baguio and Benguet province put up genealogy booths that served as “springboards for discussions among different families,” she said. Among them were the descendants of Wakat Suello; Batil-Bitnay and Dangeg; Kidit-Kadota; Amistad; Cofes; Mateo Cariño; Tohto; Apsan Carantes and Ellen Lubos.

Baguio Ibaloys normally gather on Feb. 23 to celebrate “Ibaloy Day,” which commemorates the landmark US Supreme Court decision that recognized the concept of “native title” in 1909.

The court recognized the indigenous land rights of Ibaloy chieftain Mateo Cariño, whose lands in what is now Camp John Hay were converted into a US military garrison. The decision became a legal doctrine that has influenced world policies on indigenous peoples.

The city, which was designed and built by the American colonial government, had just celebrated its 113th Charter Day on Sept. 1.

Before the month ended, Councilor Jose Molintas of the Tohto Clan urged national and Baguio officials to apologize to the Baguio Ibaloys for displacing them from their original settlements and for supposedly “stealing” their lands. 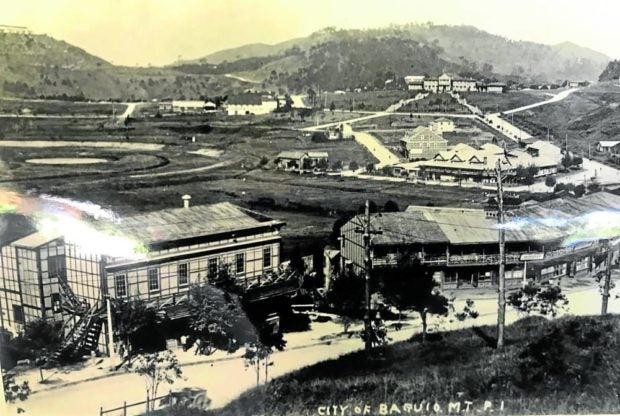 SUMMER CAPITAL | This archival print displayed at Ibaloy Garden in Burnham Park features Baguio City in the early 1900s. Ibaloy families were pushed to the fringes of Baguio when it was built by the American colonial government and developed into a colonial hill station and the country’s summer capital.

The task of perfecting Ibaloy genealogy is difficult, said 29-year-old Benjamin Palmito Dulnuan, who has been tracking down and validating bits of information about his family line.

Although the dominant Baguio Ibaloy families are identifiable when using the city’s common boundary map, their genealogy becomes more complicated when family connections are traced back through centuries, he said.

Baguio, then known as Kafagway, used to be part of vast Ibaloy properties that reached into the Ilocos region, he said, adding that Ibaloy genealogists have tried to access archival maps and other resources to determine how Ibaloy society grew before colonization.

“The areas which became Baguio and the Benguet towns of La Trinidad, Tuba and Sablan were part of the trade routes when lowland merchants exchanged goods like cattle for gold mined in Benguet,” Dulnuan said.

One of the stories involves the 17th century Ibaloy sisters Sorona, Tensha (sometimes called Tinshi or Ahinsha), Sonay, Avokay and Endekas who were considered the richest women in what was then a matriarchal society.

Avokay of Moyot (the lands between what is now Baguio and the mining town of Itogon) has the most prominent story.

Dulnuan, her descendant, said Avokay oversaw the cattle and gold trade before she lost property when the Spanish colonial government established rancherias at the borders of the Cordillera.

Avokay (whose name translates to “gold”) chose her own husband instead of submitting to an arranged marriage.

She inspected her properties on horseback while wearing a gold necklace and was always prepared to fend off “busol” (trespassers), according to a family record written by Dulnuan and Mary Jo Karla Dulnuan. The loss of her lands because of Spanish colonial decree broke her heart, but she lived for a century, Dulnuan said. 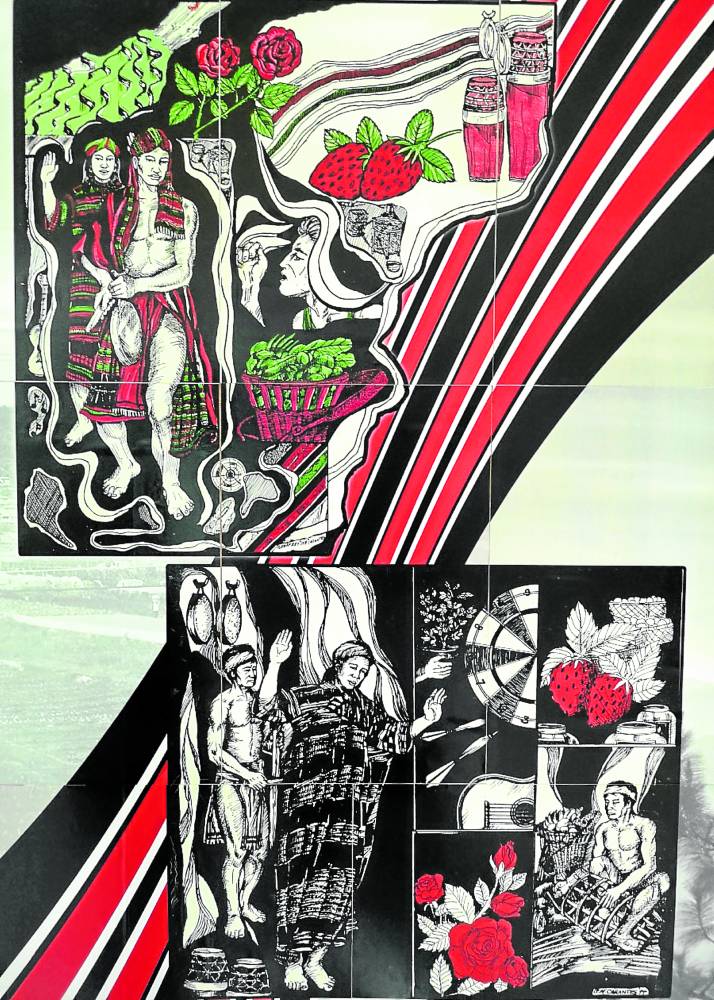 WAY OF LIFE | These sketches by the late historian and illustrator Geoffrey Carantes. (Photo by EV ESPIRITU / Inquirer Northern Luzon)

The booth of the Kidit-Kadota clan featured the first Carnival Queen of Baguio—Eveline Chainus Guirey—who was crowned in 1915. Tragically, Guirey passed away at the age of 18 due to cholera.

The Cofes clan has a tarpaulin display about the story of local patriarch Ahop Antonio, also called Benawe, who passed away on Sept. 20 at the age of 97.

Benawe was born in 1927 with his umbilical cord wrapped around his neck, and his family buried the newborn, thinking he had died.

But owls circling in the air prompted the family to dig him up again, discovering Benawe was still alive.

Benawe survived a cholera epidemic and helped bury the dead.

Many of the clans have ties to Kidit, an Ibaloy leader associated with the 1759 Battle of Tonglo. This was a prosperous Ibaloy settlement that was targeted in one of the first Spanish incursions into the Cordillera to look for gold.

As many as 200 Ibaloys died after defending their community from the Spanish expedition, which failed to locate the region’s mines. 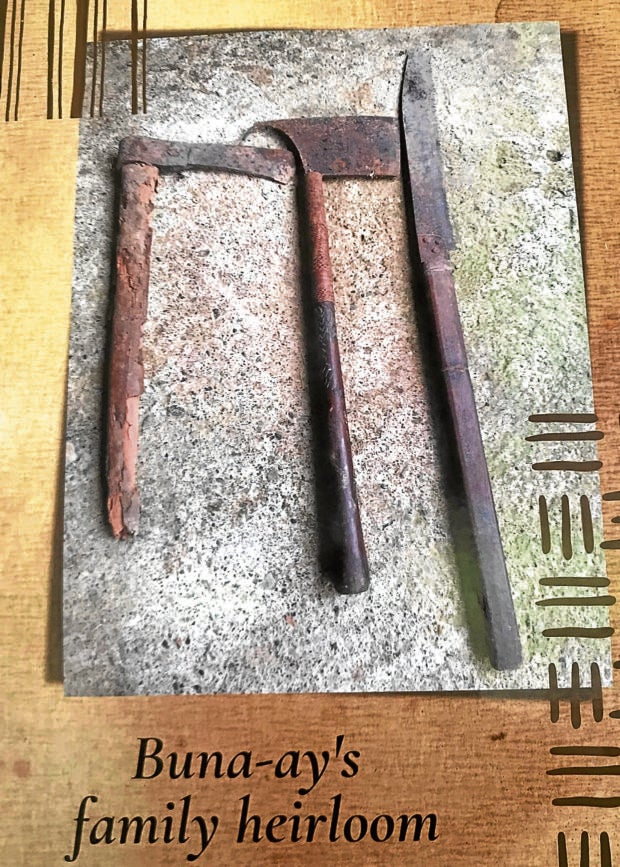 Photos of ancient farm and household tools helped Ibaloy clans visualize the lives of their ancestors during the “tonton.” (Photo by EV ESPIRITU / Inquirer Northern Luzon)