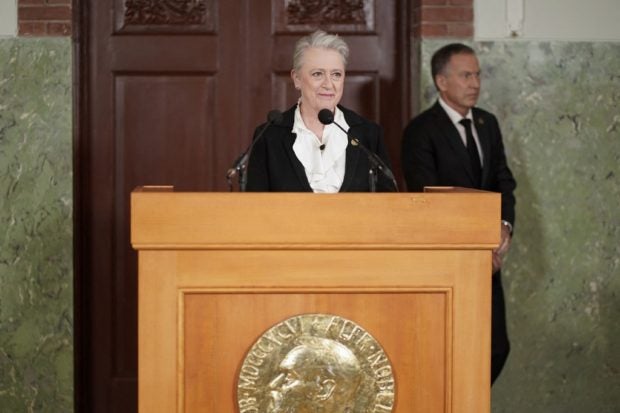 Oslo, Norway — A trio of human rights champions from Belarus, Russia, and Ukraine won the Nobel Peace Prize on Friday, a highly symbolic choice of laureates drawn from three nations at the center of the war in Ukraine.

“They have made an outstanding effort to document war crimes, human rights abuses, and the abuse of power. Together they demonstrate the significance of civil society for peace and democracy”, the head of the Norwegian Nobel Committee, Berit Reiss-Andersen, told reporters.

The committee called on Belarus to release Bialiatski, 60, who has been jailed since 2021.

Bialiatski’s wife said she was “overwhelmed with emotion” after the news.

While the prize was not a direct message to Putin, Reiss-Andersen called his regime an “authoritarian government that is suppressing human rights activists” and that the committee wanted to highlight the “way civil society and human rights advocates are being suppressed.”

‘Not yielded an inch’

The award will be presented at a formal ceremony in Oslo on December 10, the anniversary of the 1896 death of the prizes’ creator, Swedish inventor and philanthropist Alfred Nobel.

Reiss-Andersen said she hoped Bialiatski would be able to attend.

“We do hope… that he can come to Oslo and receive the honor bestowed upon him”, she said.

Bialiatski was imprisoned from 2011 to 2014, and was again arrested following large-scale demonstrations against the regime in 2020.

“He is still detained without trial. Despite tremendous personal hardship, Mr. Bialiatski has not yielded an inch in his fight for human rights and democracy in Belarus”, the Nobel committee said.

In addition to establishing a centre of documentation on victims of the Stalinist era, Memorial compiled and systematized information on political oppression and human rights violations in Russia.

It became the most authoritative source of information on political prisoners in Russian detention facilities.

The organization has also been standing at the forefront of efforts to combat militarism and promote human rights and government based on rule of law.

Both Bialiatski and Memorial have been mentioned in Nobel speculation in previous years.

After Russia’s invasion of Ukraine in February, the Center for Civil Liberties, founded in 2007, has engaged in efforts to identify and document Russian war crimes against the Ukrainian civilian population.

“In collaboration with international partners, the center is playing a pioneering role with a view to holding the guilty parties accountable for their crimes,” the committee said.

The Peace Prize is the only Nobel awarded in Oslo, with the other disciplines announced in Stockholm.

Earlier in the week, the prizes for medicine, physics and chemistry were announced. The 2022 Nobel season winds up Monday with the announcement of the winner of Nobel Economics Prize.