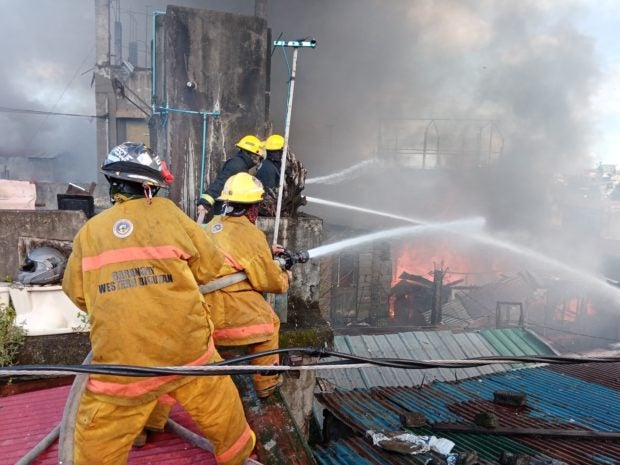 MANILA, Philippines — The Bureau of Fire Protection (BFP) was grilled during a Senate sub-panel hearing Friday where it pitched to use nearly half of its unspent P94-million fund for fire trucks to buy more than 2,000 firearms instead.

BFP director Louie Puracan said they must procure 2,282 guns for firefighters in 146 cities and 17 regional offices per the BFP Modernization Act. He also noted that the BFP previously asked the Department of Budget and Management to fund its firearms procurement, but their request was deferred due to fund shortage.

The Senate subcommittee on finance deliberated on the proposed P251.18-billion budget of the Department of the Interior and Local Government (DILG) and its attached agencies, including the BFP.

In 2021, President Rodrigo Duterte signed the BFP Modernization Act, which provides for the arming of 2,282 or 7.9 percent of the more than 32,800 BFP personnel. Duterte said arming the BFP may be reasonable because firefighters “are exposed to so many dangers.”

But Senate Minority Leader Aquilino Pimentel III reminded the BFP that its primary mandate is to put out a fire.

“I’m saddened with the idea of [using the] savings for fire trucks to buy firearms,” he lamented. “So ang tanong ko na lang (I will just ask this question) – if that is within your power and authority, under your review system, gawin ninyo iyan (do it) – pero (but) P45 million is good for how many fire trucks?” he asked.

Puracan replied that the P45 million from the BFP’s P94 million savings could buy three fire trucks at P15 million each.

“So, the policy question is: three more fire trucks or 2,000 plus firearms? I think for the BFP, that should be a no-brainer, because you know what you are supposed to do,” Pimentel argued.

Echoing her colleague’s concern, Senator Nancy Binay said the BFP should prioritize addressing the fire truck shortage instead of purchasing guns. In addition, she stressed that the BFP could coordinate with the police to provide security.

(Maybe it’s better just to use it to buy fire trucks than firearms since good coordination between the PNP and the BFP is possible. The PNP can provide security for our fire personnel during fire incidents.)

Senator JV Ejercito, meanwhile, urged the BFP to realign their priorities and provide fire trucks and stations to poorer cities and municipalities.

This call came after Puracan revealed that 203 municipalities across the country do not have fire stations.

Ejercito also asked the BFP if 200 local government units have no fire trucks. The BFP chief confirmed the information.

(I’m wondering why cities and first-class municipalities are still the first to get the new fire trucks.)

(Let us not be swayed by legislators. Just say that those who have none should be prioritized because they are pitiful – only borrowing fire trucks from neighboring towns.)

But Puracan said the BFP uses a specific formula in its fire truck distribution.

“Eight [fire trucks] go for the re-fleeting program. Most of the fire trucks now – around 400 are 40 years old and above. Nire-re-fleet muna natin, sir, iyong mga (We’re re0fleeting first, sir, those) first class municipalities dahil sa (due to) population density. Only two of the 10 [fire trucks] go to municipalities without fire stations. Iyon po iyong formula natin (That is our formula),” he explained.

Under the 2023 National Expenditure Program, P27.77 billion is earmarked for the BFP. With reports from Kristelle Anne Razon, trainee