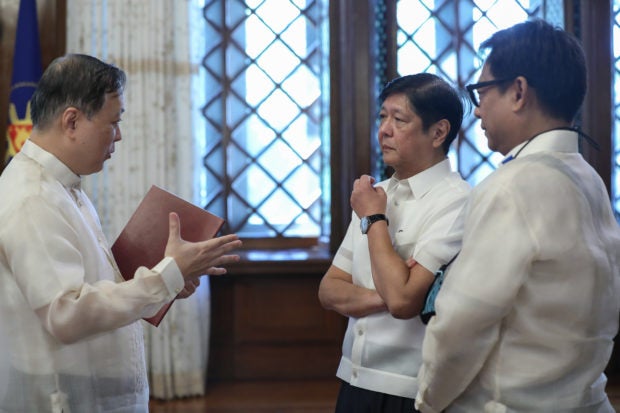 MANILA, Philippines — As the 100th day of President Ferdinand Marcos Jr.’s presidency approaches on October 8, some senators praised and counseled him on Thursday.

“I think he is doing a good job. First of all, he jumpstarted it with several Cabinet meetings on daily basis. He chose a very good Cabinet team. Outstanding economic team. And he is the best salesman for the country,” Zubiri said in a press briefing.

Padilla, meanwhile, said in a statement: “A good start… During his first 100 days, the President — aside from assembling a powerhouse team of economic managers — has personally taken the role of ‘traveling salesman’ in attracting investments from other countries.”

“He is also personally addressing the nation’s concerns on food and agriculture as concurrent Secretary of the Department of Agriculture,” the neophyte senator added, hoping that Marcos’ performance will be sustained until his term ends on June 30, 2028.

According to Padilla, Filipinos “must unite to support what is right and correct what is wrong, because the President’s victory is a win for our motherland — and most importantly, a win for all Filipinos.”

Gatchalian also said that the President addressed concerns on agriculture “when he let the investigation run its course on issues hounding sugar importation.”

He further noted the over P1 trillion Marcos brought home after his business trips to the United States, Indonesia, and Singapore.

(This is just the start. We have a long way to go. But we need the help of each one to make a recovery easier.)

On the other hand, Senate Minority Leader Aquilino Pimentel III advised Marcos to “keep his eyes on the ball,” noting that Filipinos suffer from soaring prices of commodities, a declining educational system, and a severe problem with law and order.

“I believe he’s trying his best pero bawas-bawasan na lang natin itong mga kilos (but I hope he lessens his acts) or activities which give us a hint of some insensitivity to what our people are going through right now.

“This is really a very difficult time to govern. The world’s situation is very unpredictable, if not chaotic. I hope he will always ‘keep his eyes on the ball.’ Let us not be distracted. Let us give our responsibility 100 percent of our focus and attention,” Pimentel said in a separate statement.

The minority leader also questioned the President’s trip to Singapore, where the F1 Grand Prix race was held.

“When he appeals to defend the budget of the Office of the President, we will ask him that question. Who paid for the trip? That is very important to know,” he said.

The Palace previously said that Marcos’ trip to Singapore was “productive” as he met with a Singaporean official on the race’s sidelines.